Helllllo readers – today may be a first. But a good first I think. I’m reviewing two books from an author back to back which I normally try to avoid. However after read the first book from John Perrier I thought I needed to see if the other books I had been sent has the same straight-forward style or whether this had more of a writerly feel. After reading the second I couldn’t help myself but write up a review; ENJOY!

When an Oxford Professor stumbles upon an old naval Captain’s log, he unwittingly discovers what many scholars now agree is one of the greatest maritime adventures in history.
In 1821, Captain Fintan McAdam set sail from London, solo, in search of adventure. During his journey, he discovered incredible new worlds and interacted with their amazing inhabitants. They forced him to confront his enemies within, learning much about himself.
Captain Rum, as told in McAdam’s own words through his journal, is a tale of discovery, despair and delight. It will keep you enthralled through many a stormy night.

As the blurb suggests the book follows the discovery of Captain McAdam’s journal that pens his sea adventures in the year of 1821. Leaving in search of both an adventure and to leave his life and miseries in London behind we see Captain Rum discover himself at sea – new places, terrrors, worries, natives, a few near misses with death, we see our protagonist begin to discover himself, sometimes positively and sometimes not so much. With Bubo the parrot beside him what could go wrong?
My review then – did I enjoy this? Yes I really did if I’m honest with you. The language style and the feel of the writing is very vivid and applicable to the time that the book is set. It flows wonderfully and really has a lot of character and depth. The writing is still in a diary style format meaning that it is still a little straight-forward in terms of the writing style but because of the characterisation it has a much more engaging feel – for me anyway. Here we see one of Captain Rum’s dreams.

The ocean was deep – deep and black – and was spitting white foam over the gunwales. The storm’s ferocity grew with every passing moment, and the wind tore at her sails until they were just flailing canvas rags. Just as it seemed she could take no more, two giant waves careened into either side of her. But instead of crushing her, the waves transformed into a pair of giant wings. The wings pulled themselves free of the sea and then flapped in steady beats, like that of a dragon. Slowly, my little sloop lifted herself above the waves and flew away to safety.

Parts of the book are incredibly interesting and even though Captain Rum is pretty much our sole character the author manages to engage the reader and keep us reading through the tale. During the adventure Captain Rum ends up stranded on an island and needs to grow certain seeds and plants to help him get the boat fit for sailing. I thought this part of the book was exceptionally well written and it really made me feel as though all of this could be true. I could imagine the Captain carefully trying to grow the seedlings whilst trying to mantain his strength and his mentality – it really is an intriguing tale.
Captain Rum as a character is a bit of an odd one. I felt for him with the loss of Beth and the struggle with alcohol to mantain his sanity but then he has such a strong compass to succeed and discover and be one with the sea. He is honestly a fantastic character and one I did really enjoy reading about. Bubo is a lovely and quirky character and he is given such character that he really becomes a member of the story in his own right.

Would I recommend this overall? Yes, yes, yes. If you like historical fiction and you like the idea of adventure this book is really brilliant. I guess the only complaint I could see is that the diary style does mean it reads very much as like a self-discovery tale but I thought it was well-written with a strong character and a darling idea. Really really brilliant.

PS: Don’t be naughty and skip the very beginning, the author has very cleverly put together a note about the writing of the book which is such a special touch.

Helllllo readers, I’m not usually one for Christmas stories but as I’ve been getting into the Christmas spirit a little earlier especially with all the Christmas markets I’ve been visiting I thought a festive read would be fitting. This year I’ll have (hopefully) done Birmingham twice and also Manchester and both I am sure will be wonderful. It’s a shame this year I’m not going with my parents but the weekends just haven’t added up but I thought today I would read and review for you a super short but super sweet Christmas story. Enjoy!

With Christmas just around the corner, the residents of Skipley village are gearing up for the annual bake off, and tensions are high. Winning means a lot to everyone involved – talented cake-shop owner Katie dreams of baking stardom, Rachel wants to prove she’s more than a stay-at-home mum, and John hopes his culinary skills will impress the woman he loves.

But when the judges discover that some cakes have been tampered with, the villagers’ loyalties are called into question – whose ambition would stretch to sabotage, and why? The Christmas Bake Off is an exclusive short story from Abby Clements, author of Meet Me Under the Mistletoe. This ebook edition also includes bonus recipes for cinnamon cookies and vanilla and almond biscuits. 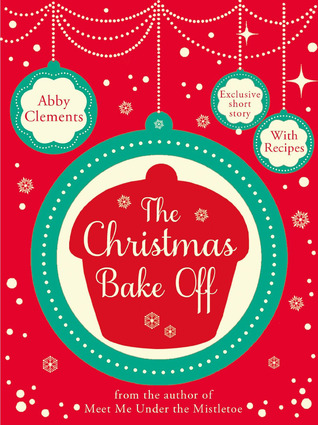 As the blurb suggests the book follows a baking competition in a lovely little English village. Among the competitors are Katie who wants to make herself known more professionally in the baking world and Rachel who desperately wants to prove she’s more than ‘just a home baker.’ Baking a gingerbread house desperate to impress the judges – there’s a problem. Sabotage? Who will be the winner? Who has tried to stop the competition winning? All will be revealed in this ‘christmassy’ baking read.

Did I enjoy this festive tale? Yes, don’t get me wrong it is incredibly short – you could plow through this on a lunch-break or a longer bus journey but it does pack a festive punch. The characters although lacking in-depth come across strongly and have lovingly created personalities. Although the plot does use the sabotage of the cakes to bring drama it is all very light-hearted and sweet. The bake-off, rural village was played up to make this a really sweet read and I did feel incredibly festive reading it.

I did think that there could have been deeper insights into the characters. The book is very, very (very) short and a couple of extra chapters that could have introduced a sub-plot would have helped to fill out the book a little more. The recipe at the back is a welcome addition and I cannot wait to give them a try and bake some Christmas goodies but the book didn’t quite deliver for me in terms of enjoyment. There is a smidgen of romance between two of the bakers which could have been developed but wasn’t quite enough for me to really invest myself in.

Overall this is the perfect lunch-break read when you just need a minute away from the computer, or curled up on the sofa with a hot-chocolate after a long day at work. It’s a sweet read, with a sweet ending. I found myself wanting more from this due to its short length, but for a couple of pennies on Amazon it’s definitely worth a read.