Helllllo readers it’s Saturday which is kind of awesome and I have a really interesting review for you today that will definitely brighten a few faces. One of the things I adore about running a book blog is the variety of books I have the chance to get my hands on – it’s not every day I pick up a book about dwarves in space but maybe I should. I recently went to a bookshop and had no idea what I wanted to read; with MLBB I kind of just read anything and everything which is perfect really. Enough of the babble and onto the review.

Thousands of years after the jewelry’s destroyed, the sword reforged, the dragon ridden, and the indecipherable prophecy translated into a recipe for sugared biscuits, the dwarves turned to that final frontier: space. And along came the elves, orcs, gnomes, trolls, ogres, and those vermin-like upstarts, humans.

The Elation-Cru is not the flashiest ship, nor the newest, or even has all of its bolts attached; but she can fly. Well, sort of wade through space, and that’s when all the parts are working. She supports a sugar addicted dwarven pilot, an elven engineer, an orcish doctor, a silent djinn, and the lone human trying to hold the entire thing together with duct tape. Variel, the captain, has been hiding from a secret for the past five years and time’s finally run out.

When she goes against her common sense and fights to save her onboard assassin/renter from a job gone sour, she finds herself before an ex-colleague that knew her in her previous life as the Knight of the realm. The entire ship is sent on a mad dash across the universe — from a decaying space station, home to the wackiest species the galaxy has to offer, down to the Orc homeworld, which wouldn’t be so bad if Variel hadn’t spent most of her previous life fighting in the war against them. Chances of survival are nil and slipping fast.

I’m not going to comment hugely on the  blurb because I want to just go straight into pulling this apart and looking at all the great things this book manages to do. I don’t normally like fantasy/science fiction books they’re just not for me, but, I enjoyed reading this. The plot although a little heavy was interesting and dotted with exciting events, battles, relationship struggles and there are dwarves in space so – good. I thought the characters were built up well and given strong character straights – I personally found Ferra a really interesting and intriguing character and I liked watching them all develop and their relationships grow throughout the tale. They come across very human (if that makes any sense?) You can imagine them each distinctly.

I liked that this is a real mixture of genres; sci-fi, romance and humour and it’s a brilliant mix as for a reader like me I found the balance made this easier to enjoy. Also in terms of the romance it’s not your cupcake sweet romance but one that builds naturally and develops as the book continues – it feels like a grown-up romance rather than something manufactured for the science fiction genre which I have seen numerous times before (ie space junk) and that made me very happy. There is a lot of action too if you were wondering; it’s punchy, written with guts and isn’t too flouncy which worked. You can get too much emotion and back-thought but here it’s just in your face attacks. It also works with the story line that’s occurring it’s not added for the sake of adding it so thumbs up.

There is a big wobble though and it’s aggravating but the writing style is quite difficult to get used to and to a point understand. Some of the more complex passages I had to read through a number of times to understand what the author was trying to tell me and at times I just had to move on hoping I hadn’t missed something vitally important. It’s just too boggy at times. I thought that the writing improved as I continued but there were a couple of times I thought of just giving in and calling it a DNF. I’m glad I didn’t but if I was in a less determined mood I might have done  which means others may.

Would I recommend this? For the humour the intriguing characters and the style of the story I would yes, but there are parts that are a little tricky to get through and if you make it through the first slightly painful chapters it does get a lot better as the author finds her feet. An interesting read and one that I enjoyed but I thought had more potential.

Morning readers, before we start the review I guess a little bit of an explanation as to the book choice. I’ve followed texts from dog on tumblr for a little while and it popped up on my wordpress feed so I decided to buy a copy; don’t ask what was going through my mind – I think probably a glass too much of wine but it arrived I had a lovely time rifling through it and thought I would tell you all why; don’t judge.

When October Jones figured out he could send text messages to himself on his mobile phone, he naturally decided that the best use of this discovery was to send passive-aggressive messages to himself under the guise of his bulldog. And so the exasperating, slightly delusional, and utterly endearing Dog and his alter-ego BatDog were born.

Dog is back – the Bark Knight has risen. Unfortunately for weary owner October Jones (but luckily for us), that means there is a brand new selection of the funniest, most bizarre texts from his insane canine companion. There is also the welcome return of Batdog and CatCat (half cat, half cat), and a new ‘friend’ in Benedict, the creepiest pug in the world. 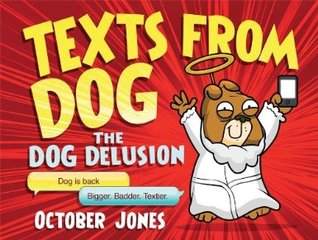 As the blurb suggests the book is the sharing of texts between author October Jones and his pet bulldog (alter-ego Batdog.) The texts range from keeping the neighborhood safe from the vicious enemy who might also be known as the Postman, and his arch-enemy CatCat. The texts are often sarcastic, tongue in cheek and tend to rely on Batdog causing trouble and his poor owner having to clean up the mess created.

What can I say, I am very easily amused and this book really captured the life of a companionship with a rather loveable although slightly volatile Batdog. We get to delve into the lives of the dogs being left alone to wreck/break/ruin household appliances, attack the neighborhood and general dog behaviors. There are around two hundred texts or so and many connect with other texts so it does feel like a story between the two rather than being written aimlessly.

It’s a quick read and one that you flick through and then pass on for another to enjoy its charm. I think this would make a perfect secret santa present or something for wrapping up and popping in a stocking. It has the feel-good factor although not child safe – I will say that. The language although amusing and adds to the charm of the book sure isn’t clean

There were a few scattered illustrations throughout, and we get a number of images of BATDOG which was a nice addition to the pages. This is the second book and it was nice to see a lot of original text as after looking at Amazon and Goodreads it seems that the first has a lot of repeated from social media. I really enjoyed reading this and will definitely be buying numerous copies and sending them to a number of friends I think will really find it amusing. It’s a little silly, often hilarious and it’s fun – what more could you ask for?

Helllllllllo readers, it’s a Friday which means FRIYAY (yes I did just type that and only feel slightly ashamed.) I’ve been having a bit of a writing block kind of month. Reviews are being written thick and fast but these more bookish, talking posts have been more difficult. I had a think and I thought, us readers are really good at lots of things so I wanted to write them all down so we can be super proud of them – enjoy.

1) Letting our TBR list flow over until it’s so long we can barely think about it without our bank balances going into meltdown
2) Walking into the library and checking out double the books we can physically read in the time we’re allowed to read them
3) Being able to read just about anywhere; bath, bed, train, car, standing up, on the bus, we are reading ninjas
4) Spending a good thirty minutes going into the plot/characters/writing style when someone just asks ‘Hey, is this worth a read?’
5) Getting so emotionally involved in plotlines that we get book hangovers and spend the next few days wandering just emotional invested in the finished story
6) Organising and re-organising our books; should it be in colour order? Or authors alphabetically?

7) Buying a book we already have with a different cover because omgee it is so beautiful and instagramable
8) Spotting someone on the bus/train/tube who’s reading and awkwardly looking over to try and get a glimpse of what they’re reading
9)  annnnnd giving an appreciative nod if it seems like a good one.
10) Having DNF books that we’re still not quite ready to part with but knowing we’re unlikely to ever make it all the way through
11) Contemplating relationships with certain hot mess kind of characters and wondering if they’ll make you breakfast in bed.
12) Staying up till 3am because… just one more chapter then I’ll go to sleep.

13) Being a regular at the local library and always ALWAYS trying to get other people to use them; C’MON FREE BOOKS!”£¬”£
14) Getting up in the morning and thinking hair wash, breakfast, contour makeup maybe; then spending all that time reading and having to get ready in minus two minutes.
15) Never panicking when a friend is late to a coffee date cause you know – always carry a book
16) Losing keys, shoes, phone but never EVER losing a book
17) Reading 38583238583 books on the go because ya know there’s always another to read right?
18) Having a well constructed answer when someone ultimately asks the question – ‘So, what is your favourite book?’

19) Using anything for a bookmark; train ticket, receipt, another book we make it work!
20) Pondering wildly on different endings to books when they don’t quite go our way.
21) Always knowing the quickest way to the local bookstore just in case of bookish emergencies
22) Having a dedicated book for when the reading slumps kick in; Alice in Wonderland, or HP we all have one
23) Always having an opinion (whether good or bad) as to book-to-movie adaptations
24) Knowing truly which Harry Potter house you should being/ have done the pottermore quiz #Ravenclaw
25) Knowing that reading is pretty goddamn cool and being proud to call yourself a book worm.

Gah isn’t it great to be a reader? Agree/disagree let me know in le comments. What would you add?