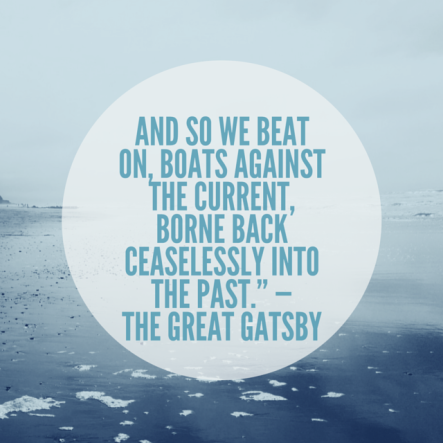 There I was,
way off my ambitions,
getting deeper in love
every minute.

There was not supposed to be a Gatsby theme this morning but when I was searching for a photo to go with my 30 Day Challenge post I found this and thought it was brilliant! I promise I won’t mention Gatsby again today!

One point to make before I get on with this review; I did write this review because of the blockbuster movie soon to be released, however it was only because I’m one of those book before film people and if you haven’t read the book you need to read it first (well that’s what I think!) Oh, and because it’s a brilliant classic that needs to be read! I think that most people stumble across this book in A-level English (Correct me if I’m wrong.) A level was when I  first read this book and I despised pulling it apart, word by word, punctuation by punctuation and chapter by chapter to discover the hidden meanings interlaced into the descriptions of Fitzgerald. However when I finally picked the book up for a second read a year or so later, I fell for its glitzy, glamorous, and superior style.

The novel’s events are filtered through the consciousness of the impeccably well-mannered Nick Carraway a graduate, who moves to New York to join the high-life. Upon moving to NY Nick rents the house next door to the mysterious Jay Gatsby, a reclusive but eccentric millionaire. Every Saturday Gatsby throws prestigious, scintillating, glittering parties where the young come to marvel at the extravagance. The story revolves around the mystery of Gatsby, a reclusive and mystifying character. Despite his ability to throw the wildest, ornate and showy parties, underneath, Gatsby is dissatisfied and lonesome. Nick discovers that Gatsby has fallen head over heels for a Daisy, a charming but gentle character, and Daisy also loves Gatsby. The only problem is that Daisy is already married, to the arrogant and aggressive, Tom Buchanan. Their reunion at Gatsby’s house sparks their affair. However Tom soon sees the change in their relationship and challenges them about their continuing affair. The story continues in a escalating fashion ending in a dramatic finale. (That I shall not reveal for spoiling it for new readers!!)

The prose is skilfully created with an incredible understanding of the American Dream, and the corruption and greed that comes from it. The novel is inextricably linked to his wealth and the unhappiness it brings Gatsby whilst also showing the rotten values of the American dream; that money, wealth and popularity are all there is to achieve in the world. Fitzgerald attacks the American dream and the shallow social climbing of society and paints a picture of a lifestyle and decade that is not only fascinating, eccentric and decadent, but also superficial and devastating. -The Great Gatsby captures brilliantly the American dream in a time when it had descended into decadence. 100% worth a read so if you haven’t get on it!