TGIF is the only way I can truly describe my feelings at the end of this week. After being unreasonably ill at the beginning of the week, spending the next few days furiously packing to catch up with the days and evenings lost snuggled up in bed with a hot water bottle wailing over my bellies insistent pain and having a number of wobbles with my fellow lodgers over the bills, washing up, even toilet rolls I’m shattered. A surprise weekend for my dear friend Anna and a moving day set for Monday it’s fair to say I’m ready to leave this week behind. Today’s review comes  after reading a  Buzzfeed interview; the interview with Caitlin Moran was sarcastic and blunt in style and made me desperate to read some more from her. Spotting at the bottom of the article that she’d written two books I vowed to get my hands on copies. Last weekend trawling a quaint book market in London I stumbled upon ‘How to be a woman,’ a steal at £2.50. Other than buying a big mac on a hungover Saturday this may have been the best £2.50 I’ve ever spent and I’m going to let you know why.

Upon opening the cover I was a little sceptical; buying the book purely on the tone of the article rather than finding out the contents of the book the headings, such as ‘I become furry,’ ‘I start bleeding,’ and ‘I encounter some sexism,’ threw me a little. Worry not, because upon finishing the first chapter I realised that as like I had upon finishing the article, I think if we met, Caitlin and I would become firm friends. She has the comedic, whimsical blunt and sharp tone that delivers a punch to the readers jaw in ever feminist fuelled gag/story/teaching she throws our way. Before you stop reading don’t panic at the F word, I know some of us pale at the mention but Moran puts it perfectly, the way my mother always taught me, ‘I’m neither pro-woman nor anti-men I’m just thumbs up for the six billion.’ I’ve had this argument with friends before over being a feminist but Moran finds a way to put it perfectly; in a nutshell, put your hands down your pants, do you have a vagina? If yes do you want to be in control of your vagina? If you answered yes to both, congratulations you’re a feminist. Now before we get all political as we often do around gender equality (rightly so) this is a self-confessed ‘part memoir, part rant’ and the lack of politics makes it all the more a good talking point and a book of basically bloody good common sense.

We start with Moran on her 13th birthday; weighing 13 stone, eating cheese lollipops (a hunk of cheese the size of your head on a fork eaten from said fork) and having stones thrown at her by boys on regular occasions. The book ultimately documents her story from that day to the current day. Taking the theme of personal politics we follow the author as she discovers masturbation, crazy dancing, wearing your own pants, getting to grips with wearing a bra and coming to terms with being the proud owner of a big hairy muff. So what’s the big deal? Why is it brilliant? It’s the way it’s written. It’s magnificent, both provocative and hysterical you could hear me giggling on the bus from Hanley to Newcastle unable to stop myself. She doesn’t throw in gags but they instead they are an integral part of the story woven continually throughout the narrative. Several parts stick in my mind; the stories of her family and their bond is beautifully but honestly described and her account of the birth of her first child is chillingly written and helps to perfectly describe the authors humility. However two sentences later she’s jesting that she will never get angry about Norwich Union changing its name to Aviva ever again. It’s a constant whirlwind that pulls the reader along, I couldn’t for love nor money put the goddamn thing down. 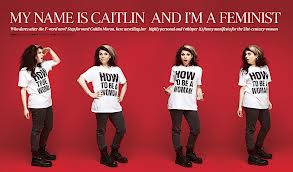 The writing is full of swear words, angry shouty capitals and incredibly honest and often shocking confessions. You could easily be forgiven for thinking that this comes across as a grating and crass barking teenage writing style but it is handled with grace and hilarity which comes with the self-assured and utterly candid quality of writing that comes from this sublime author. However what spoke to me most is that this is a book of common sense; it makes feminism sagaciously simple. She speaks of feminism grounding to a hault and suggests us renaming ourselves as strident feminists and us and any male feminists getting up on chairs and screaming it from the rooftops. At one point she states

‘Feminism, as it stands, well stands. It has ground to a hault and no-one is tackling OK! magazine, £600 handbags, tiny pants, Brazilians, stupid hen nights or Katie Price. And they have to be tackled…rugby style, face down in the mud, with lots of shouting’

Having grown up with five brothers and sisters Moran truly believes we’re all just ‘some of the guys,’ and feminism is simply the belief that women should be as free as men. Simple eh? It’s a cheerfully bright and honest concept that for someone that describes herself as feminist but has never been quite sure to say it, can honestly say I needed this book.

This is a brave, consistently clever, naughty, rude, blunt sarcastic book with wonderfully honest writing that I chowed down in huge hunks. I can honestly say everyone should get a copy of this book sit down and take a little read at a book that attempts and succeeds to answer the question; What do women want? Pretty much the same as everyone else.