Reviews, reviews, reviews, reviews; I am slowly climbing through the pile and attempting to get the list a little more organised and feel a little more manageable. If you are waiting for a reply to your email, I promise you will hear back from me. I don’t want to take on anymore manuscripts until I’ve made it through all the first ones emailed to me and as the number is nearing thirty or so it could be a little while. However please be patient and I will make it through to you as soon as I possibly can. I’ve had quite a few misses in terms of books recently and it’s left me a little bit miserable. All the ones I think have the chance to be brilliant have just missed the mark on so many levels. It’s been a lot of romantic genre books and it makes me more and more cynical about the genre as a whole I’m sad to say. Today however, a crime mystery that left me a little blown-away and wanting more. Something that I am a little surprised to admit but all the same a brilliant book to get your hands on.

Ray Courage’s wife Pam died thirteen years before in a car accident. Or did she? Ray’s world is turned upside down when he receives a series of e-mails from someone claiming to be his dead wife, accusing him of attempting to kill her and vowing revenge. Ray sets out to find the identity of the e-mailer only to discover the circumstances of his wife’s apparent death appear to be all but accidental. Soon Police Detective Carla Thurber comes to suspect Ray of killing his wife, and of a subsequent murder of Pam’s confidant. Meanwhile, a murderous predator who does not want the facts of Pam’s death to surface aims to stop Ray. In the greatest challenge of his life, Ray must outrun the police and elude those who are out to kill him as he seeks the truth about his wife’s death.

So, quite a devastating book plot but it’s one I think you will really and honestly find intriguing. Ray Courage’s wife Pam has been dead for thirteen or so, killed in a strange mishap or accident if you like because no vehicle was ever found at the scene of the crime. After the tragic event Ray attempts to move on with his life and make a new life for himself and credit to him, he does. However, one day his life is turned a little upside down when he receives an email apparently from Pam stating that he attempted to kill her. Thinking it is only a sick joke his is quickly made aware through further communication that the police has been contacted. As a disbelieving policewoman begins to point the finger at our main character the body of his wife’s former co-worker is found in his apartment and it’s becoming a little more sinister. Taking the law into his own hands we follow Ray as he drives to clear his name and regain his innocence. 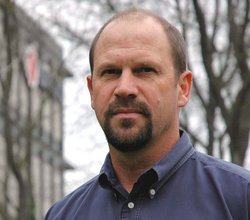 Right so a little bit of a technicality first. I am reading this book without any prior knowledge of the books coming before. If I am correct this is book number three and therefore if any comments I make that relate to the first two instalments apologies. This book is a little bit of a whirlwind and after a number of disappointing books earlier in the week it’s brilliant to finally get something into my hands that is truly provoking of those feelings that come when you get caught up in a mystery. The writing is strong and bold, Mackey really knows how to spin the reader and keep them guessing. With thrillers I’m always trying to stay one step ahead, it’s a competition for me as a reader but here I really struggled to piece everything together. The characters are strong and witty but with bite that makes them feel genuine. Ray has a sense of oldness meaning he feels a little weathered but safe. Sometimes when you read mystery books the characters are just as jumpy as you are but here Ray instils a feeling of calm that jars with the tense atmosphere and it really works.

I liked the red herrings that are mixed within the plot and I thought the entire story had a keen eye for detail. The clues are just subtle enough to create drama and intrigue but help pull the reader in making the twists, turns and surprises all the more enjoyable. Commenting as a reader of this book only, I liked the way the book started on the first page, it really grabbed your attention. I don’t know whether the previous two do but some mystery books feel like the cogs are slowly, slowly turning and just easing you in but here, no chance. I liked the constant toying between whether Courage’s wife could somehow still be alive and I thought that the interaction between him and his daughter Rubia was wonderfully described. It also added a human touch to the story. The pace is quick and light which means that you are constantly trying to sift through for the clues that are there but you can’t quite get to. 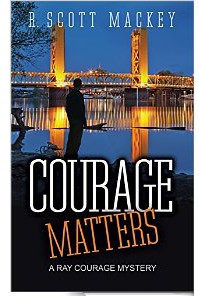 As a reader of this genre I would recommend this straight away. It’s a brilliant book with enough characters, bad guys, twists and turns to keep you thoroughly entertained. Even if you’re not a big fan of the mystery/thriller genre, I know not all are I think this has enough included, with the parts between Rubia and Ray to fill the gaps that you may normally miss from a book of this genre. I’m a little upset I’ve come into this series now  however I’m utterly happy I had the chance to experience this book for myself.

Right, after finished a rather interesting blogging activity for a sociology module I went in search of some book related articles to blog about and stumbled rather conveniently upon this;

“Little Free Library is a non-profit, tax-exempt organization whose mission is to promote a sense of community, reading for children, literacy for adults and libraries around the world . . . In its most basic form, a Little Free Library is a box full of books where anyone may stop by and pick up a book (or two) and bring back another book to share . . . Little Free Libraries themselves are hand-crafted structures that contain constantly changing collections of books donated and shared by people of all ages and backgrounds. Most Little Free Libraries are placed in front yards, parks, gardens and easily accessible locations . . . Some Libraries are located in coffee shops, in or near restaurants and community centers. . . It’s a ‘take a book, return a book’ gathering place where neighbors share their favorite literature and stories . . .”

I went onto the map and found that there are little free libraries in the UK there are only in a couple but over the USA there are an abundance of them! SO, the plan is to try and see how difficult it is to set one up here right here on the Keele University Campus. Fingers crossed I can do this and I’ll keep you informed!