Helllllo readers, hope you’re well – I’m currently writing this snuggled up on the sofa, with a hot water bottle, Pepsi Max and some rice cakes with Nandos Hot sauce. I’m on a health kick and I can’t lie My Fitness Pal has been a real life-saver. Being able to see exactly the calories and the like within each meal is really helpful. As I add these rice-cakes to today’s diary you should catch up on my latest review of Georgia Rose’s Before the Dawn.

…he moved closer and slowly ran the point of his blade along my jaw line as he spoke softly, intimately, to me.

“So, you are Trent’s woman. Now that is very…appealing.” I glared back at him silently.

There are testing times ahead for Grayson and Trent as trouble threatens Melton Manor. When an attack is made against those on the estate, Grayson gets caught in the middle finding herself and those around her in terrible danger. Terrified when she thinks tragedy has struck again she fights to protect those she now views as family and, suffering bloodshed and pain, confronts her fears – both brought by the enemy and by the one she loves. 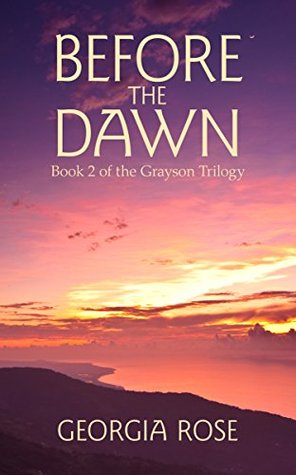 As the blurb suggests the book follows off from the first in The Grayson Trilogy and as I was so hooked from the end of the first I just had to continue the story straight away. The second book follows the quite stressful life of Emma Grayson who although has come along bounds and bounds in her strength of character and her confidence is still struggling with her relationship with Trent. Although the trust is growing there Trent is still undeniably over-protective and it’s beginning to put large amounts of stress upon the two.

Although the Manor appears to be quite a gentle place, underneath the people who live and work there are involved in supporting MI6 with their undercover operations and when they are targeted due to Cavendish and Trent being involved in the disbanding of a Russian criminal organisation everyone is terrified that they will also be targeted. When the danger really appears can Emma and Trent hold together? What will happen to Melton Manor? All will be revealed.

I guess the biggest question when it comes to sequels is – was it as good as the first one? I did have a couple of wobbles with the first book and for that reason this one kind of worked for me more. I liked that the relationships especially between Emma and Trent were getting worn into. I think with some books the immediate connection with characters is exciting to follow but relationships don’t just happen and get maintained – they take time/effort/patience/love/acceptance/negotiation (I could go on, and on.) I like that here we continued to see the two almost evolving with each other and trying to work on their own personality traits accordingly.

The action is a really exciting addition and I thought it definitely added the action I thought was missing a little in the first. Georgia as with the first book has a really wonderful way with words and the way that she describes the characters, the landscapes and the action is beautiful. Both books are seamlessly intertwined in terms of style which is so important when moving from one book to another. A quick point also – I loved that the author openly said read the first and then this one because the first isn’t rewritten into the second to help us, instead we plow straight in.

There are still a lot of unanswered questions especially surrounding Emma’s childhood and her parents and I found that the intrigue around the manor being attacked helped to pique my interest and make me more and more involved in the tale. The plot really builds towards the third novel and I definitely found myself trying to pace myself as not to get to the end too soon because something was telling me I wasn’t going to be getting the answers I needed in this book. I think the author has really worked the information reveals well between the books as so to keep the reader intrigue and to build between the books.

I’ve found it a little difficult to review this book because there is so much more too it than a 700  ish word review. Basically if you’ve read the first book there’s no questioning you  should read the second. If you’re intrigued as to whether to – I would say I’ve adored both books by this author and will 100% be reading the reviewing the next. Spot on.