Hellllllo readers, what do we think of the new fancy opening to the blog post? I’ve decided that instead of using my stereotypical ‘A review from My Little Book Blog,’ I’m going to make an image for every single review – cause ya know why not. Also interestingly I’ve actually got a couple of book box subscription reviews coming up so look forward to them – for now, LE REVIEW.

Don Tillman, professor of genetics, has never been on a second date. He is a man who can count all his friends on the fingers of one hand, whose lifelong difficulty with social rituals has convinced him that he is simply not wired for romance. So when an acquaintance informs him that he would make a “wonderful” husband, his first reaction is shock.

Yet he must concede to the statistical probability that there is someone for everyone, and he embarks upon The Wife Project. She will be punctual and logical—most definitely not a barmaid, a smoker, a drinker, or a late-arriver.

Yet Rosie Jarman is all these things. She is also beguiling, fiery, intelligent—and on a quest of her own. She is looking for her biological father, a search that a certain DNA expert might be able to help her with. Don’s Wife Project takes a back burner to the Father Project and an unlikely relationship blooms, forcing the scientifically minded geneticist to confront the spontaneous whirlwind that is Rosie—and the realization that love is not always what looks good on paper. 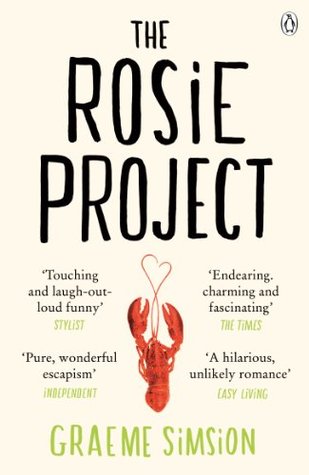 Let’s try and ignore allll of the reviews that say this is a novel about Sheldon Cooper trying to Find a Wife – it kind of is, but it also isn’t.  Don Till man is a genetics professor in his late thirties who wants to find a spouse by creating a very in-depth questionnaire. See, Don leads a very fussy life and throughout the story there are allusions that Don has Aspergers. However, Rosie becomes part of his life and she completely goes across everything in Don’s list of attributes; but a beautiful friendship (kind of) blossoms.

Don and Rosie are fantastic characters – Don’s constant flow of thought processes, and a need to keep his life constant is a continually contrasted with Rosie’s slightly outlandish and unbalanced way of life. Don’s need for example to eat the same thing each night (to minimise waste and time) the time he gets refused from a club despite it being a very expensive, waterproof model and generally messing things up in social situations is delightfully wonderful to read and equally interesting.

The storyline revolves around Don’s wife project (which 250000% does not include Rosie,) and Rosie’s father project which revolves around her need to find her biological father and deal with the stress of her relationship with her adopted father. Throughout both learn a lot about the other and how the other interacts and lives. A particularly special moment is when they travel together to New York; their two personalities together in a new place creates a beautiful section of storytelling.

In terms of genre this is really a romantic comedy and I think if you are fan of either the romantic or comedy style genre you will enjoy this. The writing throughout the book is really clever, the pace moves quickly and will pace but still manages to squeeze in numerous story-lines and supporting characters. The author has created really brilliant contrasts between each of the character’s ways of speaking which really adds to the dialogue of the book. I also loved how the author included a number of social gaffes, but Don is incredibly resilient and almost practical in them. He understands his strengths, his memory, his ability to being smart and dedicated; for example…

Overall this was a really lovely tale, that I thoroughly enjoyed. I can’t comment to throughly on the use of Aspergus because I just don’t have enough knowledge and I know there has been a little upset about how it’s portrayed. Overall I thought this was a fantastic book full of love romance and comedy and I can’t wait to read the second.

One thought on “The Rosie Project by Graeme Simsion”