Hellllllo readers, interesting post today and a book I really want to get into quickly. I’ve started to run. I’ll probably write a post about this soon because it’s something I want to talk about more but basically one morning I got up and went for a 3K walk, and then I did the same, over and over and over again. Then a month or so back I started to run that 3K, over and over again until it became a 5K and a 7K. It’s given me a new confidence and a new sense of determination and one thing that really helped me sustain my running was this book. 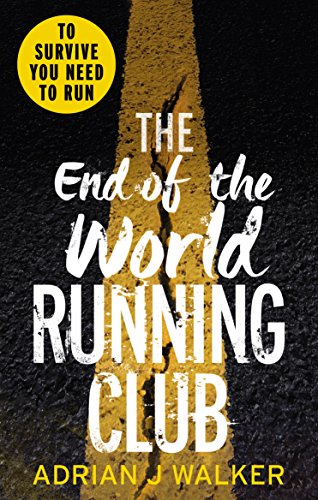 I honestly hold the mantra ‘To Survive you Need to Run’ in my head every morning at 6am when I’m exhausted, my head is heavy with sleep and I feel like rolling over and becoming a duvet burrito. When I started running (a little while before I picked up this book) I didn’t realise how hard it was. As a younger version of myself 5 miles really wasn’t that hard to do, but as an adult I could barely make it ten meters without feeling like I was going to have a heart attack.

The character in the book is the same – stranded from his family in the middle of the collapse of the world, overweight, struggling with mind daemons that he could have done more for his family and relying on too much alcohol to get through it all I saw myself a little in this character. He begins to run, knowing that if he doesn’t make it to Dover where his family are getting ready to leave for a less damaged country, they will be gone, maybe forever. As he continues travelling hundreds of miles the difficulties become more tragic, lack of water, other people who have survived threatening his very existence.

All the way  through he faces obstructions, both physical and mental. Whether an inability to keep his feet moving forward mentally or physical blockages like broken cars, and unstable houses that threaten to cave and squash our runner –  I carried this book everywhere. The thing with running is you don’t really have time to turn over every little stone inside your mind. Instead you have to keep your feet moving, you breath steady, and you HAVE TO KEEP GOING.

If you’re wondering how much is end of the world style writing and running, it’s about a 75% to 25% split, but every move in the book has the need to survive. Whether in a cellar with no air, ravaged cities, or crammed military bases, there’s a sense of hope, seen mostly in the passages of running – where we get to really feel the mental aspect of running, kinda like this passage here:

“That other beast inside you, the one you rarely see? You have it tethered tight. It watches and waits while you mess up your life, fill your body with poison and muddy your mind with worry. For some it takes just one call to free it. For others it takes five hundred miles of agony. But mine was free now, for the first time since I was a boy, running with a grin like a wolf through moonlit bracken. Pain ran alongside me, kindred and beautiful and garinning my grin. I’ll always be here, it said. Always, but now we’re friends.”

In terms of characters, Ed actually feels REAL. Like a real character – he has problems, he has insecurities, he has wobbles but at the same time he’s exciting to follow. The motley crew that he runs with including the terrifying but hilarious Bryce add their own tune to the book – each has a very special addition to the story line and reading about them all, getting to know their stories, it was beautiful. I have rarely felt so in tune with a book.

In terms of the writing, the book is beautifully written, the writing is soulful and also to the point, it has such a strong rhythm and as we move further into the book and find more and discover extra characters and subplots Ed pulls us through – no matter how messy the world is, we get to keep going, we keep running no matter difficult or dangerous the road gets. The ending is beautiful, I won’t give it away because that’s not fair but I had a real step back moment, where I had to give myself five minutes (on a bus in Nottingham) but I might have shed a tear.

This book is incredible, whether you define as a runner or not. I know it’s made it into my top ten list of books due to its sheer power to encourage me to always look forward, lace my trainers up and get running. Now it’s your turn.

7 thoughts on “The End of the World Running Club by Adrian J. Walker”