Heeeeelooooo readers, I’ve recently been getting back into my reading after a couple of months struggle and I forgot how much fun reading could be? I know that sounds a little odd but it’s just been something I haven’t felt like doing. I’ve also found myself reaching for books I would never normally read – science fiction if I’m honest and it’s been really eye-opening. Without further delay onto a super exciting tale by Andy Updegrove.

America is rushing headlong into another election year, but something is wrong – the polls don’t match reality. It’s up to cybersecurity super sleuth Frank Adversego to find the Black Hats who are trying to hack the presidential election, and stop them before they do.

The action begins when a nameless government agency recruits Adversego to find out who’s manipulating the polls, but he soon learns that the voting results are at risk as well. From then on, it’s a race against time to see who will stop who as the presidential election – and Adversego’s life – hang in the balance.

In this latest Frank Adversego thriller, you’ll meet a scheming Native American casino manager, a scrum of presidential candidates too incredible to be believed anywhere outside of a real American election, a former Secretary of Defense who will stop at nothing, and an attractive French hitchhiker that Adversego rescues in the middle of a desert, and soon wishes he hadn’t.  The Lafayette Campaign provides a satirical take on American politics and our infatuation with technology that will make readers pause and wonder: could this really happen? 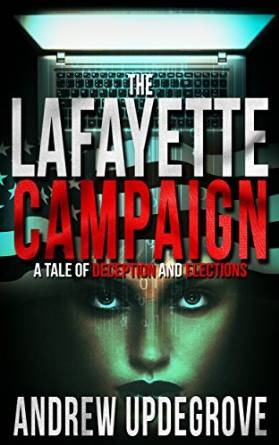 As the blurb suggests the book follows on from the previous tale and we’re straight back into the giddy, exciting, science-fiction but relatable feel that Andy gave him during our first book. From the blurb you can see that the plot line follows the terrible doings of a nameless government agency who decides to recruit Frank to find out who really is interfering and manipulating the polls and what can be done to stop them. As he delves further in his finds that the voting results are also at risk and everything must be done to stop this from happening before the results of the Presidential Election. Will Frank be able to solve the mystery? All will be revealed.

Did I enjoy reading this? Yes – HELL YES. As like in the first book Updegrove really manages to weave in an old-school American vibe and then manages to bring it completely up-to-date with a gritty, thriller style feel. It’s done so well – and even better than in the first book and helps to cement Frank’s character – he’s really beginning to become a protagonist I really want to follow and keep reading over and over again.

As with the first book there are look of technical passages that did lead at time to me getting a little confused. They’re written well it’s just with me having limited knowledge I did get the feeling of being overwhelmed but I thought the author dealt with this really well. The slightly old-fashioned narrative style mixed with the very up-to-date jargon allows for an intriguing mash-up of qualities if that makes sense. On one hand we have the contemporary technology and on the other we have the use of democratic voting which works realllllly well together.

In terms of the writing style I loved the mix of dialogue and then gritty tale telling – in thrillers, especially ones that revolve around technology it can get a little bogged down in the telling of the tale but here the mix is brilliant. There are lots of twists and turns to keep up with, which kept me intrigue and for me kept me on track with everything that was going on around me. Once again, as with the previous book it definitely has a feel of threat for the future and to act as a warning. Throughout it is a terrifying tale which only added to the action inside the plot-line. The idea that we’re in a time currently where this could happen.

Frank as always is brilliant – he’s such a strong willed, character who although keeps himself to himself has such a warmth. I liked that the author added a little romance for our main protagonist to add another side-story and to create a little side-plot which I thought was brilliant. It helped to make the main character feel a little more human

Overall I definitely enjoyed this book – it had so much more to it, it appealed in so many more ways and it made me fall for Frank so much more. Cannot wait to see what happens next.