Hellllllo readers, hope you’re well and not suffering from this horrible cough thing that is still going around; I can’t seem to get over it. It just keeps coming back again and again. I’ve decided this year to try to review some of my  old favourite books that I have neglected a little on mylittlebookblog. I’m therefore going back into my book archives to bring you an old favourite of mine that I’ve read numerous times – Across the Nightingale Floor.

In his black-walled fortress at Inuyama, the warlord Iida Sadamu surveys his famous nightingale floor. Constructed with exquisite skill, it sings at the tread of each human foot. No assassin can cross it unheard.

The youth Takeo has been brought up in a remote mountain village among the Hidden, a reclusive and spiritual people who have taught him only the ways of peace. But unbeknownst to him, his father was a celebrated assassin and a member of the Tribe, an ancient network of families with extraordinary, preternatural skills. When Takeo’s village is pillaged, he is rescued and adopted by the mysterious Lord Otori Shigeru.

Under the tutelage of Shigeru, he learns that he too possesses the skills of the Tribe. And, with this knowledge, he embarks on a journey that will lead him across the famed nightingale floor—and to his own unimaginable destiny… 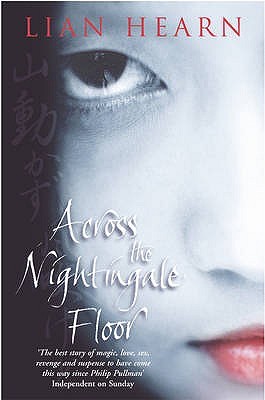 As the blurb suggests the book is set in medieval Japan where clans are battling for power. Takeo is thrown into the action when his village is overthrown and destroyed by the terrible Lord Lida – but Takeo escapes under Lord Otori Shigeru’s wing. it soon becomes apparent that despite Takeo’s gentle nature he has powers that need training so that he can realise his true purpose; becoming an assassin as it turns out. On the other side of the tale is Kaede who has been taken hostage since the age of 8 due to her being seen as responsible for the deaths of many men who have fallen for her beauty. As their lives spiral closer together we see the two pushed to their limits to escape the destruction.

So that’s a very vague over-view of the plot but it’s quite difficult to get everything in without giving everything away so I’m going to sell it with my review (hopefully) Firstly the writing style is utterly brilliant, not only does it immediately throw us into the action but you get the feeling that Hearn trusts the reader. We don’t need a meandering back story instead Hearn slowly gives over the information as the plot unfurls. It’s refreshingly not spelt out but is instead naturally written, slowly giving out the details and leaving the reader to do the legwork.

The characters are fully fleshed out and well bodied. Takeo is both gentle and yet utterly ruthless and cunning. He has such a wonderful moral spirit and yet his genes, and his back story are completely contrasting. It’s a clever spin the author has created as it allows her pull with the character and create excitement. Otoris Shigeru is also a clever character – I thought the relationship built between him and Takeo really sold the story. Kaede although begins a little frail she is a gutsy full on lady and her side of the story definitely matches the excitement of Takeo’s so the story feels balanced.

The writing is honestly beautiful – the action is there throughout and yet it is written with such understanding of the racial, political and religious implications. It’s all so well thought through and it flows wonderfully. The author doesn’t scrimp on descriptions either – the landscape comes to life before you eyes and it ends up having almost a movie style feel. It all leaps from the pages right in front of your eyes. I have read in reviews that the Japanese cultural elements aren’t always completely accurately represented however for me, it’s a world created to stir the reader’s imagination – it’s more of a Japan-inspired fantasy full of romance, politics, religion, and excitement. This book is a power house.

I would wholly recommend this book – many of you know that my love of fantasy books is far and few but this one is definitely up there with the best for me. It is a little dark at times but just for the prose this book is worth a read. It’s one of those books that just has everything and I for one can’t fault it.