Hellllllo readers, time for another review and this time it’s a lovely romantic tale and I think my first of 2016. I’ve been working my way through a stack of ARC copies and I’m working towards my Goodreads target which I’ve recently set hopefully I will hit my goal and make sure I start completing my resolution to update my Goodreads more. However, for now, onto the review of Loving Lies by Tina Donahue.

When she is kidnapped, Senorita Isabella knows the men have been sent by her uncle in a murderous attempt to control her family’s fortune. But when she is rescued by a dashing and mysterious warrior, Isabella can’t imagine why a stranger would risk his life for her—until she discovers her rescuer believes she’s someone else…

Fernando de Zayas loves nothing more than the cry of battle. Defying death is his way of life. But when he discovers his betrothed has been kidnapped, he rushes to her aid—never suspecting that spirited beauty would soothe his warrior heart…

With her uncle’s minions close on their heels, Isabella finds herself drawing closer to Fernando. But as the desire between them builds, her secret could keep them apart forever… 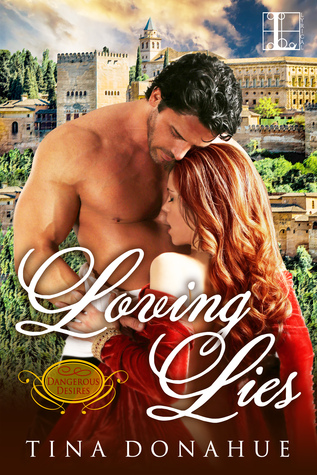 As the blurb suggests we follow the story of Isabella the daughter of a Spanish Grandee and a Duke – however due to the terrible deeds of her evil Uncle she finds herself in the middle of a slave auction, except Isabella’s sister was the one that was supposed to be taken! Abducted and sold as a sex slave Isabella is saved by the Holy Man Fakir. Everything however is not as it seems as it turns out that he is not Fakir but instead Fernando, a Spanish Knight. Once again a twist; Fernando thinks he is saving his betrothed but instead he is saving her younger sister. Deciding to keep the truth a secret Isabella wards off the advances of Fernando knowing she is not the one for him – but can she help herself falling in love and what will happen when he finds out the truth? All will be revealed!

So that’s the premise of the story, onto the nitty-gritty. This is a book full of love, deception, sacrifices and family. Throughout we see Isabella doing all she can to protect her sister – sacrificing her life to keep her safe. It’s a lovely passionate story and I thought the feelings that was woven between Isabella and Fernando were well written and I adored the push and pull of it. Seeing Isabella attempting to stop herself from falling for Fernando was exciting and helped to push the plot forward making it gain pace. The love story is written with power and gusto and it shows that the author really understands how to create such an all-consuming romantic plot line.

Overall the pace is strong and helps to propel the adventure forward. This is a historical fiction and the writing style definitely fits the time period in terms of the language used and makes sure that the reader continuously feels transported to a different world. During the tale we see the two travel back to the castle and they are faced by a number of adversities that helped to add to the excitement of the tale. They are written well and help to add tension and suspense to the tale.

In terms of characterisation both are built wonderfully – Isabella is gutsy and strong and yet she continuously struggles with the guilt of the love she feels for Fernando. Fernando is a sweet character and although I didn’t feel as much as I do for some fictional characters I did enjoy reading about him and following the story. The only wobble for me really was at times I felt as though the writing style didn’t match in all places –  during the more passionate scenes the writing is heady and over-the-top which works but then during some of the spoken scenes the writing wavers and becomes more simple.

Overall I enjoyed reading this more – the plot moves with pace and the characters are well-built. For me the writing just lacked a little to really pull me in  in places, but it may be because I found the plot a little cloying. It was a lovely little romantic read that didn’t quite do it for me (although was very close!)