Hello readers, hope you’re well. It’s been a bit of a crazy week so apologies if I’ve been a little quiet. Getting my head back in the blogging game after Christmas took a little longer than I thought and I’ve just has 564758385757 post ideas but no time to get them all down. Saying that having the time off has meant lots more reading time (despite the reading slump) and I’ve been reading some stunning books – today’s is pretty wonderful, enjoy!

Independent troubleshooter, Alex Leksin, is recruited by Prime Minister Saidov when the plan to reduce Russia’s reliance on an ever more hostile Europe is put at risk. Hell bent on expansion, President Karpev’s strategy is first to shift the markets for his country’s vast energy resources to the East and Saidov has been charged with overseeing a planned pipeline for Russia’s oil through Turkmenistan and Afghanistan to access these markets. Failure could mean catastrophe, spreading the conflict raging in the Middle East to Russia’s own borders.

Against a background of political corruption, state-sponsored terrorism and increased Taliban insurgency, Leksin moves on to Turkmenistan, one of the world’s most sinister countries, right at the heart of Central Asia. Initially his enquiries reveal nothing to cause alarm. Other factors, though, suggest otherwise: wherever Leksin goes, someone tries to kill him; people in a position to help him are assassinated; and information turns out to be misinformation. 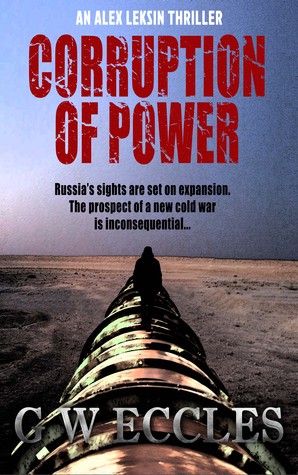 So you’ll have to forgive me a little because this is the second book in the series and I don’t believe I’ve read the first – it’s been one of those days. This book follows the protagonist Alex Leksin who is a trouble-shooter working for both Prime Minister Saidov and President Karpev. His job is simply to investigate and monitor the deal that will see Russia moving its vast energy resources to the East. Leksin is put in charge of making sure everything is above-board so to speak. However, there’s a bit of a time constraint, as Leksin only has twelve days to report back before Karpev needs to sign the contract with the President in Ashgabat – you still following? As Leksin continues his investigations he finds that there are people on his trail that will stop at nothing to take him off the grid and assassinate him and the knowledge that he has collected.

So now we’ve got through the nitty-gritty plot onto the good bits. Did I enjoy this book? Yes, although I’m not sure I understood all of it. When it comes to political, action books I do struggle sometimes. There is a lot of plot to understand and to keep your finger on and at times I did find myself confused as to what exactly was going on. However Eccles has created a really strong character in Leksin. Easy to warm to and a strong exciting character I really enjoyed reading along and learning more about the corruption of powers and the dangers that were constantly playing with our main characters.

It is also important to know that this book is incredibly well-researched. It appears that Eccles has spent a large portion of his life living and working in Kazakhstan Russia and it really shows. The descriptions and the detail put in is of a wonderful quality and it adds flair to the writing – you can tell that this really is a passion of the authors and it comes through strongly on the page. It’s not just seen in the action and the political parts but also in the parts that talk about culture and the lifestyles that are found in the different locations of the book – whether we’re in Russia or in Turkmenistan it’s got so much flavour and understanding that can only come from real-life experiences.

Although it has a very real feeling to it there are parts that are a little, over-the-top. For me, this added to the plot because there were parts that were quite heavy and with these more exciting, action style interludes it helped to break-up the heavier bits of text. The book does include a lot of twists and turns and I enjoyed the juxtaposition between the two governments in Russia and Turkman and I think the author did a great job in explaining it in a way that was interesting and  exciting. I’m sure there are bits that I missed in terms of detail but I felt I got a very rounded experience from the book as a whole.

So would I recommend this? Yes, definitely. I not only really enjoyed this book but I felt that I learnt something. It’s been sold as a thriller but it is more than that. It’s a literary experience and one I really, really enjoyed. Thumbs up and can’t wait to see what the author writes next.