Hellllllo readers, hope you’re well, I’m currently having a bit of a reading attack. I’ve read so much over the last couple of weeks that I’ve got 10000000 million things to write about. Not that it’s a bad thing. I’ve recently been feeling really positive about the blog. I’ve spent the past ten months really working on the blog and I finally feel almost happy with it so feeling kinda good. Today’s review comes from my much loved Kindle; enjoy.

Life can be good. But sometimes it’s not quite what you had in mind…

Peter & Jen are working hard to keep up a rundown North London cinema, but making a living on a diet of old Woody Allen movies and movie themed pastries is trickier even than it sounds.

Peter’s brother, Salvador, has wanted a career in medicine since he was a boy, but the red-haired — and usually red-faced — junior doctor may not be the best match for the frontline practice of the local sexual health clinic. And it certainly doesn’t seem the best place for him to find a girlfriend.

Jen’s cousin Kate’s architecture career isn’t on the up as fast as she’d like, either. Getting over her ex is taking longer than she hoped too, and the fondness for high stakes poker he left her with is proving an expensive therapy.

Jason, a wannabe rock star and has-to-be plumber, is Peter’s best friend from a childhood when they were both briefly TV stars, on a zeitgeist-defining teen drama. While it’s a time Peter would rather forget, Jason sees his past as the passport to his future, and the much-needed money a possible reunion offers could be the temptation needed to make his best pal think again.

As reality gets in the way, and dreams get further out of reach, the friends try to figure what to do when life doesn’t work out exactly as it does in the movies. 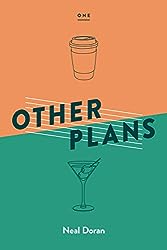 I’m going to spend anytime really talking about the contents of the book because it’s all there in that rather long blurb. As you can see this is what I tend to call a combination-story book. It flits around detailing the stories of a number of different contrasting characters, relationships and lifestyles. Each is dealing with their own wobbles, problems and the like. In terms of characters the two that really hit it off for me as a reader were Peter and Jen who are struggling to bring their cinema into popular demand but are desperate to keep it’s old fashioned charm. Their story was told wonderfully and gave us little ups and down and dips as we learn more about their alternate tastes.

The writing style is a little bland, it doesn’t really tell a tale in terms of depth but has more of a contemporary writing style. It is very sparse in descriptions and is based more on the actual events that are happening. The problem with this is that there are so many characters that we struggle to really connect with many of them. I thought there was a real story to be told with Salvador and his struggle to deal with his embarrassment as a sexual health doctor but we’re told so small snippets that we barely get to learn about him before we’re whizzing off.

It’s a shame because the author knows how to get humour into his writing and really play with the reader in terms of quality of writing despite it’s lapse description but it just lacks something to really make the reader connect. The blurb states there will be six books and my brain just says why? I’ve read one and I’ve got such a small snippet into the characters lives I’m very unlikely to read the next but if we had fewer characters and we focused more on one or two interweaving plot lines I feel this review would be very different.

Overall I enjoyed reading this book; I wanted something quick and a little easy read and that’s what I was given. Unfortunately I wanted so much more; as a reader I want to feel invested in what I’m reading and here I just didn’t. I really want to read more from this author maybe just not more from this series unfortunately.