Hellllllo readers, been a bit of a tough week I seem to be entering a quarter life crisis; I’m twenty-two living with what feels like twenty-two people and yet see none of them, everyone I work with is mature, and married with small children or a least a goldfish or two and I’m still trying to decide whether it’s wrong to drink wine at midday on a Sunday. It’s fine if you were wondering; I have checked. Books have been a bit of a saviour at the moment and this one especially dragged me out of my comfort zone and has made me feel a lot more upbeat even if it’s in the fictional world; without further moaning onto the review.

Danger, heartache, grit, tension, brotherhood, trauma, betrayal, sacrifice, fear. Death square in the face. All in a day’s work for the REAPERS – an elite black-ops team deployed to remote, untamed conflict zones. Their mission: to assassinate covert targets, conduct rescue operations and gather intelligence.  We follow this tight band as its members evolve; some will die and be replaced by new faces, some will defect, be injured or retire, and others will change in unimaginable ways. All will be tested to their limits.

REAPERS is an epic set in a sprawling dark fantasy universe of tragic characters, complex villains, and shocking story turns.

BOOK ONE is a novel-length collection of the first seven staves (which were originally released as independent episodic chapters in serial format). 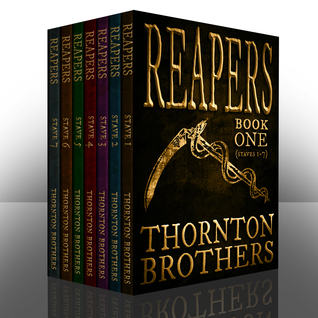 I guess the first thing to state in this review is these wonderful authors have been writing for a little while and this book made from seven staves was released as chapters independently before now being collaborated together and sent out into the big scary commercial world of books. The book as the blurb suggests follows the daily work of the reapers who are a cream of the crop black ops who are sent out to do all the things you could ever expect; missions, rescue operations etc etc all written with a superior knowledge I couldn’t quite believe was entirely fictional.

Into the nitty gritty I suppose; I thought this was fantastic, a mix between fantasy and hardcore blistering action. I say this often but I find fantasy difficult to stomach – I don’t like fairies or dragons and the like. But here, it is a much more subtle part of the story – for me I didn’t feel like the plot was built on the idea of fantasy but was used to transport to the reader to a new and exciting land which I thought was wonderful.

The writing is stunning; I normally go through and find a paragraph later in the book but I thought the first sentence really screamed at me this is going to be bloody epic and it was.

‘A sprawling desert camp sweltered under a sun of molten gold. The settlement’s crude and rambling architecture was fashioned from the bones and husks of great sea beasts blessedly rendered extinct by some untold ancient catastrophe that impossibly evaporated an entire sea and left its primordial life to wither and cook for incalculable aeons upon the cracked and naked floor.’

It doesn’t get quite more exciting than that does it? The writing is smooth and moves with such pace; the main characters are built with style and understanding. Their personalities intermesh wonderfully and there is a real feel of comradeship; here I would normally really go into the character profiles but it’s better to read and get them know them based on the way they interact than me briskly trying to throw them all in here although I must admit a soft spot for Tusk. In terms of content this book is full on and it moves seamlessly through action, memorable emotional moments and then sudden stunning descriptive segments it is wonderfully woven together.

This isn’t my style of book or genre and yet I know when the next instalment comes out I will be the first to be getting a hold of and reading on because there is so much I still need answered. Here I felt that although the characters are well loved by the authors there is literally no way of finding out what is happening next; I was continually on the edge of my seat not sure whether the next character to be killed/stabbed/kidnapped/bombed would be favourite and I thought that was brilliant because I was just so enraptured.

In terms of negatives there are couple of tiny editing issues and there are so long sentences and passages that could be broken down but that’s a small quibble. I adored this book and everything in it. Bloody well done.

2 thoughts on “REAPERS – Book One by the Thornton Brothers”