Hi readers, another day another review. This book was read for the #boutofbooks readathon. A week challenge to read as many books as possible and blog/tweet/comment as the week went on. There were also challenges such as collecting and photographing different books from multiple countries, playing M.A.S.H, if you haven’t played it, you should; and also pairing bookish characters with one another. It was a really interesting week and I really liked the laid back feel. You didn’t feel pressured to read so many pages as having a full time job it was difficult at times but it’s something I do want to do again soon. I adored this book and I think you might too.

Danny Daggers is about to die. He just doesn’t realise it yet.

A Leeds University student with a very popular YouTube channel, Danny Daggers is taking his alcohol-downing stunts on tour.

He’s about to find out that not everyone’s a fan.

Rory Gallagher is the alcoholic veteran journo who’s mentoring her.

Carnage in Cardiff might be just what they need to begin and revive their respective careers.

Tom and Joseph work at one of Cardiff’s many call centres.

Tom is fed up of working boring jobs and living for the weekend.

Joseph is just happy to have a job.

Then there’s the Amstell brothers.

Simon’s just escaped from prison. And he happens to be the father of Joseph’s girlfriend’s son.

And his brothers happen to be psychopaths.

These stories collide and intersect over a frantic few days of heavy drinking, drugs and ultraviolence, set against a backdrop of dystopian modern Britain. 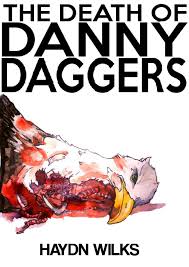 This book just sang to me from the blurb I thought yes this will definitely be up my street. The book follows the death of Danny Daggers as he staggers through Cardiff half drunk, half stoned. We meet a plethora of different characters; Ji Eun an intern at a local paper and her mentor Rory Gallagher a drunken journalist who’s intriguing take on life was a brilliant comedic tale to watch play out. Tom and Joseph who work at call centres, trying to make a life for themselves and the terrifying Amstel brothers. As more and more characters are woven in (Jodie, Danny, Frank and co) the lives of all the characters start to interweave; at the same parties, pubs, gigs whilst the author holds back just how Danny Dagger, internet star finally comes to a grizzly end.

That’s the boring bit out the way onto the good stuff. The writing is brilliant, it has a Cardiff tone and the links to the city and the lifestyle/language/landscape were spot on. You can tell the author has really gone to town here, making sure everything is just spot on. The characters are well written and extensive; even the smaller roles such as the Amstel brothers are really worked to make sure they have characteristics. It’s really well done and although you’re unlikely to like almost any of them (Ji Eun and Rory excluded) for me it works because you become invested in their lives and the stories being woven about them. The writing is fresh and loaded with expletives, and words such as mun and butt which you do get used to after a while. This author has really dabbled in making you feel like you’re wandering through Cardiff and as a reader I really appreciate that.

The language is at times overly done, for me I like that, but I can see that some might find it over heavy on the description. Sometimes it feels a little like you’re wading through toffee but that’s how I like it. Dystopia? Maybe not quite the right word, it doesn’t quite sit with the books I read that feel like a dystopia but I understand the feeling of the tales being unbelievable and the shock factor is done with skill. The ending for me lacked a little clarity, I would have liked to have seen Ji Eun’s and Rory’s stories tied up a bit more because she was one of the only characters I liked. Additionally I thought the last few chapters were a bit rushed; we build so extensively towards the ending and it falls a bit flat. There are more loose ends than I would like but with so many characters maybe I’m asking too much. There are a couple of spelling and grammatical errors but they can be easily tightened up.

However I bloody loved this novel, it held me in a way that only certain novels do. There was book about year ago that I read called Remember to Breathe by Simon Pont (I mention this book all the time) and I haven’t found anything like it since. THIS IS IT, MY NEW BOOK TO IMPLORE TO GO GET A COPY NOW MUN. It’s dark, foreboding and chilling, it has angst, terrifying characters and real life stories told in a way that transports you to the gritty ketamine fuelled streets of Cardiff. Go and read it, unless you hate swearing (maybe) but go, add to your TBR’s and let me know if you found it as brilliant as I did.