Helllllllllo readers and happy, wait what day is it? It’s Monday which means it was my twenty-second birthday yesterday. Where does the time go? When did I get so old and so, so, very tired. I’ve been travelling up and down the country, and one of my favourite places to read is on public transport. You can just block out everything and get on with a good chunk of whatever book is currently taking your fancy. I reviewed thirteen books in June (somehow, I need a life goddamn it,) but I plan to review maybe a couple more in July, we will see it’s somehow nearly August *yawns*. Today’s review is the second instalment of a book that I read a couple of months back by Dena Haggerty. Hope you enjoy. 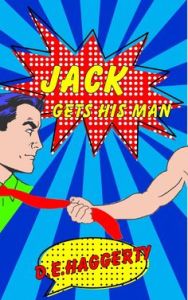 Jack’s life is awesome. His store is making money hand over fist and his best friend has found love. So what if he’s feeling a bit restless and put out about his upcoming birthday and his ex is being a pain in his fabulous behind? That’s nothing he can’t handle, but then his super-hot new bookkeeper discovers things at the store aren’t actually as they seem. Someone is playing fast and loose with the finances. Jack’s bestie and his gal pals, the gray-haired knitting detectives, jump at the chance to solve Jack’s problems. When they aren’t re-enacting scenes from spy thrillers, they’re setting Jack up on dates and generally insinuating themselves into his love life. They’re determined to find love for Jack as well as his missing money. Will Jack catch a thief or find love? Either way Jack’s going to get his man.

So firstly I’m going to direct you to my review of Murder, Mystery and Dating Mayhem. Although this is a standalone books, it does carry on from the first, therefore if you’re really going to invest I would suggest starting there really. In this sequel the main characters are back, but we take the view-point of a minor character in the first book that I truly enjoyed. Jack is the co-owner of a shop that supplies clothing to cross-dressers and plus-sized women (interesting grouping there.) His store manager is in a crisis moment and a book-keeper is hired to keep an eye on the books. However when he starts looking into the company accounts he notices a number of worrying discrepancies. Jack, unwillingly calls in the ‘gray-haired detectives’ to help uncover what on earth is happening. Throw in the complications with his co-business partner (who happens to be an ex-lover) and a new love interest and things are going to get messy. *eek*

I must admit I am so thrilled that Dena decided to keep this series of books going because they are so much fun to read. I thought our lovely elderly detectives were there jubilant selves, not only staging stake-outs but performing accounting audits and getting into ever more trouble with the local police. They are such a brilliant addition to the novel as a whole and they are just as witty in the second book. I thought the mystery of the business was an intriguing main story and then the love interests help to add sub-plots to fuel the content of the book. I thought that Izzy and Noel still being involved was a good touch because they are the two that spun the first instalment and to get them back felt a little nostalgic.

I have two little wobbles; one, I thought that Jack differed quite a lot from the character we met in the first book and that left me a little confused as to whether it was the same character. He felt a lot more ‘bolshy’ and confident. It just felt like there were a few continuity issues there. The second is just a wish for the next book (fingers crossed there’s another on the cards.) It would be nice to learn more about each of the detectives individually, because although we get snippets I think to delve in more in their personalities would add a nice touch. My only final point was it’s not too serious and I thought that was brilliant, but if you’re looking for something really complex, this may not be the next TBR book for you. It feels more like a feel-good fun book to read rather than something that is going to make you wrack your brains.

So, out of the two I think I preferred the first book because I think the mystery side of it was a little more complex but this is a brilliantly light summer read on your kindle with a glass of sex-on-the-beach and a tiny umbrella. The plot moves with pace and the characters are fully formed. A little more continuity between the books would have helped me as a reader but a lot of giggles, intrigue and an author to watch as she produces more really fun to read books.

4 thoughts on “Jack Get’s His Man by Dena Haggerty”