*Eeeee* such a truly special review for you today. Katie Cross has been an author that I have treasured working with over the past two years. Her constant jubilance and her flawless way with words is one that is rarely matched in her genre of choice. I say this a lot, fantasy books are not my thing, really. HP = yes, everything else = mainly no, but she is one of the few authors that when she emails me I think gah bloody yes, send it over now goddamn it. I will calm down, but this will be another review whether I sing praises for this stunning author. Hands down brilliance.

Absolute Power Corrupts Even the Best of Friends.

Mildred Graeme is a witch that knows what it’s like to fail. She loathes small talk, struggles with magic, and grew up wretchedly poor. What’s easy for her best friend Evelyn, a wealthy, powerful socialite, is difficult for Mildred.

The two lifelong friends reunite at Chatham Castle where they fight together for the dream of a better world. Mildred wants to save the Network from political elitism, while Evelyn encourages it. When Evelyn gains power and threatens to obliterate the Network, Mildred realizes that she must overcome her fear of failure to save the lives of those she loves, even if it means betraying her best friend. 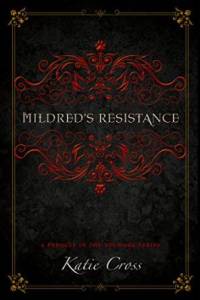 I guess the first thing to add is that, Mildred’s Resistance is a prequel to the well-loved Network Series and immediately it is a brilliant, can’t-put-it-down style novel. Prequel’s can sometimes feel a little, shoved in? As though the author suddenly realises that we need some more back-story to create more of a story in the present, but here it honestly feels not only pivotal to the writing of the coming novel(s,) but well thought-out and constructed. I don’t want to give spoilers which is always a little difficult when you get quite far into a series, but the story follows the back-story of High Priestess Mildred Graeme. As readers we get to experience her growing up, the struggles she overcomes, especially her heart-breaking family tale and the difficulties with her friends Evelyn and Stella.

The book in total covers thirty or so years so there is a lot of character profiling, inter-weaving character stories and relationships and the roles of the girls in the Central Network but Cross appears to handle it effortlessly. The book does focus at lot on Mildred, I mean it’s her book and I adored watching her transformation that isn’t so easily seen in the later books. I also thought the change in POV (we switch from first to third) was brilliantly done. It’s not such an easy thing and can sometimes feel a little rocky (I find authors tend to prefer and stick with one) but the new way of writing really suits the toying and froying of the book and the jumps in time a lot better so spot on Katie.

As always, Katie packs a punch in terms of her characters and manages to bring depth to every single one that we meet. Mildred I thought was given so much complexity and wisdom (as she is in the later books) it often felt like she could step out of the pages and tell me the story herself. Not every author can do that and not every author can hold my attention so deeply. This did and for me it’s a big compliment to Katie. I thought the way that Katie dealt with the relationships between the girls (especially Mildred and Evelyn) was pulled apart and explored really well as to bring the characters to life a little more.

The writing once again is strong and evocative, Katie brings the fantasy world to life easily and with style, this paragraph I thought was particularly poignant.

“The smell of Piccadilly Pub’s famous pumpkin soup wafted from the ovens in the back. She ignored the heady scent and kept her eyes on the close, wintry streets of Chatham City. A queue of witches bundled up against the cold loitered near the little trinket shop across the street, where the slow accumulation of dirt stained the brick, and the cobblestone street had worn smooth. She tilted her head to see the sky, but the close buildings admitted only a grimy light. Still, downtown Chatham City was a charming place.”

I guess the only critique I can really make is stepping back in time although tells us a lot about the characters the story doesn’t feel like it’s moved forward so for those wanting to know what’s going to happen next. But it needs it, not only to setup the first two books but also to give an inkling as to what is going to happen in the next book ‘The High Priest’s Daughter which will be out in September 2015! *Squeals.* Additionally, for me, the magic involved isn’t too overwhelming, it instead is an addition to the story and it flavours it rather than taking centre stage which I liked because it focuses more on our characters but if you’re looking for punchy magic sequences it’s not so much about that.

Overall, this is a simply wonderful book full of sublime characters, a strong plot and premise, yes a prequel but one that focuses on the points it needs to make to give us the answers we’ve been waiting for. I would 100% recommend this book, and Katie’s entire series of book if I’m completely honest. These reviews sound like broken records but they are truly and honestly worth a read. I promise you.