So, I’ve been meaning to do this for a while and with many of my 101 things being to improve my ability to cook this one seemed like a good one to test out my newly improved skills at the stove. It’s not that I’m bad at it, I just never make the time and when I do it’s something easy or quick. Although it often tastes rather wonderful it’s never exactly a culinary masterpiece. Now, as you all know I recently moved into a new house and despite telling myself I would have a housewarming it’s been a couple of weeks since I moved in. Perfect excuse for a get together and to invite a couple of wonderful friends round; on the menu, dips and chips to start, vegetarian chilli for main and chocolate fudge brownie dessert for dinner. Pretty simple but pretty tasty. 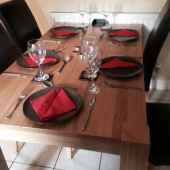 I started by buying a number of little tea light candles and crimson napkins. The house is so beautiful and the colours are so warm that once I had set the table with the round smooth chocolate coloured plates and had put out the jewel coloured coasters; a criss-cross design of ruby, emerald and sapphire squares it all looked a little wonderful. I then set about on the chilli. I started by cutting up two onions into little squares and two peppers; one red and one green. These were gently softened in the pan with some oil which took a little longer than thought but all in good time; let em get all soft and yummy. I then added the Quorn and browned that off which is a little difficult to do when it starts and ends the same colour but I cooked it off a little. Then I made up 400ml of vegetable stock. It did say 200 and a glass of red wine but I had none in so I just popped in a little more stock. After adding this to the pan with a tsp of chilli powder, ground coriander and cinnamon I pushed up the heat and let it bubble away. I then added two tins of chopped tomato and a tin of kidney beans and turned down the heat. I then let it cook for a little longer and then added a few more shakes of chilli powder.

When my guests arrived I stuck the rice on and popped a stick of garlic bread in the oven and turned the chilli onto a low heat to warm up. I served the food with guacamole, sour cream and a bowl of chopped up chilli just in case it wasn’t hot enough. Chilli probably wasn’t the best choice because I had no idea for the life of me how hot people like their chilli. If it’s my mother cooking it you better be ready for some serious heat but I just wanted a kick at the end and then everyone could add heat accordingly. I must admit I think it tasted pretty good and was just the right amount. The only small error is I didn’t quite cook enough rice which is a little silly because when it’s me I always end up with a huge amount left over but for five I wasn’t sure how to judge it. Saying that people did have seconds and there was a little left over for dinner the next night. I then served the pudding with passion fruit frozen yoghurt which I think went down a treat.

Overall I think it was a roaring success but then it is me. I’ve always marvelled at my mother’s ability to organise a three course meal and even with almost everything ready I was a little stressed and flustered despite being overly prepared. (Printing out four different chilli recipes and having dinner cooked an hour in advance, I was looking pretty good.) I’m really intrigued to do this again and serve something a little more complex. I make a mean Thai green curry and think that would go down a treat. It was the perfect way to celebrate my new house and the move, and something I will definitely be doing again. 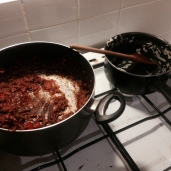