Good afternoon readers and happy Thursday. A couple of exciting reviews for you this week, and hopefully they’ll just keep on coming. I’ve mentioned before that I go home almost every weekend and although it’s a wonderful thing to know there are people waiting to see you at the end of a long week as the months have dragged on and on my tiny frame has become more and more exhausted. Even the Easter weekend I spent the days running around London or entertaining friends and family and whizzing around doing a million and one things a minute. The next two weeks I’m hoping to take the weekends a little more slowly, give myself and the blog a little more time, and recover a little. Despite this, reading on the train has created a number of sublime reading opportunities and this is one of them. This was given to me as a present for my 21st birthday last year by someone rather special and it’s taken eight months to finally get round to reading it. What I have read is a book that has made me sit up and think for the first time in a long time.

On a late summer’s day the residents of a street in the North of England are going about their daily routines blissfully. Nothing particularly special is happening. A tiny toddler is riding his beloved tricycle up and down the street, an elderly couple are blissfully celebrating their anniversary and two boys are raucously playing cricket in the road. Each are minding each other’s business lost in the dealings of their day until something terrible happens which leaves a visible mark on each of the members of the street. Especially one young woman who is trying to face up to a new and unexpected change in her life and yet she can’t quite help but let her thoughts keep dragging her back to that eventful day.

I’m going to try and give both sides to this review and yet show my feelings towards it honestly. You’ll understand what I mean as we go through but try and stick with me. Upon reading the first chapter I knew I was going to fall head-over heels in love with this book. The style is a lyrical, romantic excavation of an urban contemporary street on ‘the last day of summer.’ The street is over-run with different characters, often rarely identified by more than a hair colour, a house number, a pierced eyebrow or long trousers. Each and every one of them is affected by this violent and sudden event in time, however you will have to ultimately wait till the last page to find out what it is. The narrative is split between two characters, namely a well-spoken narrator and a second voice, one of the girls who lived on the street who is now pregnant. The description of the street and the different events that led up to but don’t contribute completely to the event are punctuated by the female voice. This is interrupted by a mysterious visit by a young man whose twin brother lived on the street and hid a secret love for the girl. Each of the stories interweave until we finally uncover the event that rocks the street to its core.

So that’s the bare bones, what is so wonderful and fresh about this book and namely why I’m trying to be a little objective is that the book is very much style over substance. The book has a simple but incredibly sensitive feel to the narrative as a whole. It is raw and bare and adventurous. The text warbles and there is no punctuated dialogue it instead seems to filter into the writing; she says this, or then says that. McGregor is undoubtable attempting to create a 360 degree panoramic of the street, taking in everything; the man lightly slapping paint on the tired door frames of the houses or the woman carefully furling out her wet washing. Ultimately the message being that even movements or actions that seem so small and insignificant can have huge consequences. The bulk of what the author is trying to collect means that the characters are almost blurry and unfocused. We never learn enough about them to really believe they are really people, there are very few names or characteristic described in full sharpness and colour. Objectively speaking it shouldn’t work but for me, here, it does.

In terms of negatives, the storyline is a little watery, and the pregnant female who narrates parts of the book comes across a little crass and blundering but in a feeble way. The ending although I enjoyed it and finishing it on the train found myself looking around and thinking ‘knockout,’ it was a little lack-lustre but at that point I was so overwhelmed with the style of the book I was lost. I guess style over substance would be my objective view of the book but I found it engaging and heartfelt and I just loved it. 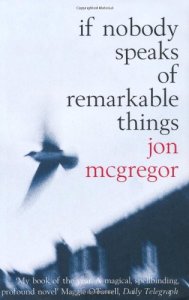 One thought on “If Nobody Speaks Of Remarkable Things: Jon McGregor”