Evening readers and happy Friday, the weekend is upon us and tomorrow I will be travelling down to Silvy for Mother’s Day which I’m really excited for. My little pudding of a sister has rather hurt her leg and I cannot wait to give her a cuddle and make sure she’s okay! It’s been a really busy, emotional and tiring week but it’s ended pretty perfectly and today’s 101 things in 101 days is pretty darn cute.

So as always a little background as to its inclusion on the list. It is a well-known fact in our family that my mother is pretty awful at keeping plants. It doesn’t seem to matter what she does they just wither and die. Sorry mum. But my Grandmother is an absolute whizz; she is the ultimate green fingered lady and I thought I’d find out whether I possessed any of her gardening skills. The last time I tried to honestly grow anything was back when I was in year two, attempting to grow cress on a wet paper towel in a Tupperware box for a school project. The results were pretty awful and although at the ripe old age of six I think the fault of this lies elsewhere I wondered whether it was time to have another go.

In my tiny little terraced house in Stoke on Trent, there isn’t much of a back garden and with my very little knowledge of what soil to use, when you should plant flowers and how often you should water them I traipsed off to my local supermarket to see if there was anything a little more basic. Upon arriving I found the most adorable purple pink bucket with a handle with a number of purple hyacinth bulbs included. I wandered home and after reading the instructions buried the three bulbs under the soft soil and gave it a water, and the waiting game began.

To start off with it didn’t look good, after calling my mother, never a good idea seeing her track record keeping plants alive is pretty low she told me that the bulbs should have been poking out the soil not buried underneath. Then the plant disappeared. I live with two other lodgers and one had decided that I wasn’t watering it enough and had popped it outside which confused me for a number days until upon taking the rubbish out I unearthed it. I stubbornly brought it back in but the next day it had once again been placed outside. After upending the culprit, my housemate Gabriel told me that he had noticed it was getting a little dry and as I’ve been so busy thought it would survive better on the wall outside. Anyway, it’s been a couple of months but slowly but surely one of the buds has broken through and with a little bit of extra sunshine last weekend has opened its petals.

Because of the way the sunshine travels over the garden I think it would have been better to place it in the middle of the garden but no knowing a huge amount and worrying it wasn’t getting enough water I think it’s been a little deprived of potential growth however I’m going to keep it and maybe add a number of others to our little patch of concrete outside. 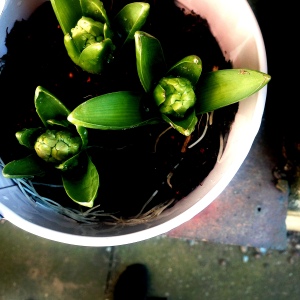 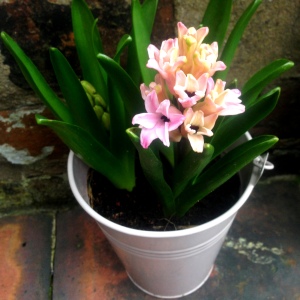