Good afternoon readers; since I’m a little off book reviews after the book review challenge I’ve decided to bring you a tasty 101 things in 1001 days challenge. Although my culinary skills are not poor, since I started my job I seem to have got into the habit of making the same things over and over again. Although this is no bad thing (I make a mean spag bol) I’ve decided to try and up my tried and tested recipes and add pizza to the mix. There is a reason behind it being pizza specifically but I’ll get back to that. A little side note, I was tempted to pretend that this went perfectly first time however I decided to be completely honest. This took in honesty three attempts before the pizza resembled anything edible; the first time I was so excited I forgot to add the olive oil. A more experienced cook could probably guess how important this is for making pizza but I had no idea and chucked it into my kneaded dough. Then to try and repair this I added flour; don’t do that, it won’t work. Second Bridget Jones moment came the second time when I managed to tip most of the flour out of the bowl onto the floor, over-compensated added too much flour and then couldn’t roll it out. Nightmare. However yesterday I started again and somehow managed to get it done perfectly.

The reason why I decided to specifically include pizza on the list takes me back to Silverstone Juniors aged just eight. For some reason, which I cannot for the life of me recall, one sunny afternoon the entirety of the school made pizza. There must have been an educational link somewhere but I can’t quite put my finger on it. The twenty of us in year four rolled up our sleeves, mixed the dough and kneaded it before adding our toppings and had the teacher pop them carefully in the oven. What came out was an inedible mass that when thrown out to the birds, was also refused by them. It was doughy, chewy and undercooked. When I came to write my list it suddenly pinged back into my memory and so I found a recipe and on Monday night set myself the task of making pizza. 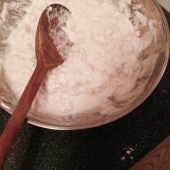 I took the recipe from the GoodFood website but seeing as the scales I was using weren’t working too well and I hadn’t realised we didn’t have a measuring jug there was a lot of guess work. Firstly measure out 300g of strong bread flour. I used the white variety however I assume wholemeal would work equally well. Then add a tsp of yeast, a tsp of salt and a tbsp of olive oil. Then measure out 200ml of warm water, make a well in the mound of dry ingredients and ‘bring together’ with a wooden spoon. It says at this point it should be a wet dough however mine was ridiculously sticky so I added a little more flour until it looked how I thought it should. Then you have to seriously knead the dough; I went all bake off style and started properly working it, until it looked pretty smooth. Then you have the choice of either letting it rise a little or just steaming right ahead. I left mine for a little bit, but it didn’t rise a huge amount so I’d be tempted to skip this step.

At this stage I decided to roast some yellow pepper in the oven; I couldn’t decide whether they would cook if I just put them on the top so I decided instead to roast them off in a little olive oil and salt but it depends on your toppings of choice and how well done you like your ingredients. The next tricky step is rolling it out, this dough is seriously stretchy. Not only did it keep pulling back when I stretched it out but it also wouldn’t roll into a circle. It ended up resembling a rather wonky oval however I managed to stretch it out a little and make it look a bit more circular. I also didn’t have a rolling pin which obviously made this a little more difficult. I then floured the baking tin, and popped the dough on before stretching it out a little more whilst on the tin. I squeezed on a little tomato puree and a couple of spoons of tomato passata and added salt and pepper before pushing it around the entire base of the pizza.  I took the roasted pepper from the oven, and cut up some pre-cooked bits of chicken which tasted pretty delicious. I then popped on a sprinkling of sweetcorn, some circles of mozzarella and some torn up basil leaves before placing it in the oven on a temperature of 160. I think the recipe said higher but I have a terrible habit of leaving pizza too long and it going a little burnt and I wanted to avoid this as much as possible.

Despite me being delirious that the pizza looked like it might work, it actually smelt incredibly delicious and it cooked rather evenly despite my oven being pretty time-worn and ancient. Although a little thicker on the outside and having a few holes in the bottom due to my panic that it would be too thick and wouldn’t cook well the pizza was honestly delicious. I don’t eat a huge amount of pizza; it’s not my go to choice of takeaway however it tasted so much better than the doughy deep pan pizzas that your regular takeaway has to offer and I will one hundred percent be doing this again soon. 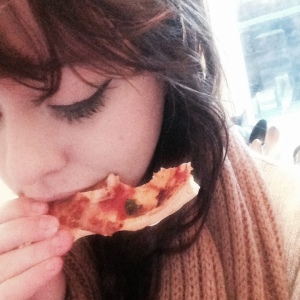