Yesterday was the two year anniversary of my blogging life; not strictly mylittlebookblog as it took a couple of months for me to finally decide on a name, work out how to write posts and the like. Nevertheless yesterday was the day that I finally decided to sign up to wordpress and get something started. Today’s review is dedicated to my mother who always encouraged me to read, put up with me constantly having my head in a book, and dragged me out of the library on our weekly visits. She took me to Baker Street to see the Sherlock Holmes house, took me to London on my 21st birthday to search for book benches and she was the one that casually, one evening whilst making dinner remarked, ‘why don’t you start a blog.’ I always comment on this but it really is down to her that I started blogging so much earlier; this review is therefore dedicated to you, you wonderful lady.

‘Elizabeth is missing’, reads the note in Maud’s pocket in her own handwriting. Lately, Maud’s been getting forgetful. She keeps buying peach slices when she has a cupboard full, forgets to drink the cups of tea she’s made and writes notes to remind herself of things. But Maud is determined to discover what has happened to her friend, Elizabeth, and what it has to do with the unsolved disappearance of her sister Sukey, years back, just after the war. A fast-paced mystery with a wonderful leading character: Maud will make you laugh and cry, but she certainly won’t be forgotten. This is a complex and totally compelling story where past and present are intermixed in a narrative controlled by Maud. She’s in her 80s and is struggling with her memory. She speaks with conviction as she slips between childhood and current events, all inextricably linked, but as a reader it’s difficult to determine the cause of her anguish, other than the fact, oft repeated, that Elizabeth is missing.

I fell in love with this book almost from the very first couple of pages. The book as it states above follows the mind of Maud a sharp and perceptive lady who can’t quite remember things. The problem is that Elizabeth is missing, and Maud becomes a sleuth piecing together clues written on little pieces of paper and documenting her search. Maud’s current reality however is woven into the past life of her teenage years, when her darling sister Sukey went missing. The two melt together creating a constantly interwoven and melded existence; the events that happened over sixty years ago are articulate and vivid. Her parents play a large role alongside her sister, her angst ridden brother-in-law Frank, the dark and serious lodger Douglas and the threatening mad lady with the black umbrella. The characters spill into the current reality making it difficult for Maud to distinguish between the two. Her life in the current day is warped and confusing, relatives and carers names and faces are forgotten making everyday life often frightening and unknown.

I was honestly consumed by this novel and I can feel a book hangover started to rise in my temples. It’s both droll and witty and then suddenly heartbreakingly distressing. Throughout I experienced Maud’s anguish as my own and I so wanted her to find the solace she needed. The writing perfectly displays the constant difficulties of living with dementia and it is so perfectly displayed that I found myself feeling deeply moved. In one scene, following her paper trail of notes Maud falls down a number of steep steps. Once home she calls the doctor who arrives telling her that this is the tenth time she has called that week and she needs to stop; her daughter embarrassed pulls Maud’s hand to hers and she cries out. All along her arms are large spreading purplish bruises. Maud herself has forgotten and in her anger at her mother’s inability to remember the two cling to each to other. The scene moved me to tears; the frustration there must be for both parties and the difficulty of living with such a debilitating illness must be so demanding. It is a powerful scene.

Maud is a stunning character; she is comical with a dark sense of humour and her voice is both truly powerful and perceptive. It’s so difficult to describe without quoting but the little details throughout are wonderfully described. Maud’s constant buying of tinned peaches because it’s stuck in her memory and she can’t remember the other things she needs, the way she places mugs of tea down on the side each time popping them down and then forgetting leading to a collection of them that Helen finds utter exasperating and yet throughout the notion of Elizabeth being missing pervades. The supporting characters are rich and full of life; Helen is a doting daughter who finds her mother’s illness difficult to understand. Their relationship is fascinating to follow. The characters in the past are just as well built up and help to make the meshing of realities all the more real.

All in all this is a book that challenges our perception of life when we are challenged with the difficulty of a waining memory. Our ability to retain recollections and experiences, both shape and define us. They give us meaning and here Maud’s is so warped it’s altering her entire existence. It might seem a depressing notion but not only does the storyline documenting the past allow Maud to express herself before the dementia but it also leads to a truly mesmerising tale that is both unfolding in the present and the past. I haven’t read anything this hauntingly beautiful in a while and it’s not one I will forget any time soon. The ending left me feeling a little weepy and there were a number of times I was brought to tears. I implore you to buy, borrow, beg, steal a copy of this book and sit down and become engrossed with this wonderful book. Even if your TBR pile is becoming more of a stack, add this one to the end I plead with you. I promise you won’t be disappointed. 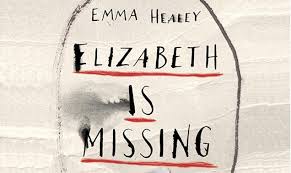 One thought on “Elizabeth is Missing: Emma Healey”