Good Evening wonderful readers, this is another book winging your way from the archives of mylittlebookblog2014@gmail.com. I’ve been going through my reviews and I found this lovely one I wrote up about a month ago. It was a very happy moment when I discovered this book because I have gone off the romantic genre of books. I am so tired of the clichés and the terrible jokes about being a single woman. However, every so often you hit a good a one and you can’t help but sing its praises so that is what I am going to do! On another note I have hit 27,000 hits this year alone as of today and I am so incredibly proud so thank you to all my wonderful readers that have made this possible. Hope you enjoy this review too!

Having exhausted all the conventional ways to meet her ‘Mr Right’ (and because now she really is a little bit desperate), Fleur Summers turns to her well-meaning, but eccentric friends and family for help. From ‘Man Mountain’; an engineer who eats everything in sight and tall dark handsome Tom with big hands but no idea how to use them, to the mysterious and brooding Henry Austin. Follow the trials and tribulations of Fleur’s journey as she works her way through a number of eventful blind dates, all in the name of finding true love. Dispatches from the Dating Zone is the British racy rom-com novel from KT Valentine.

When I read this book I was seriously ill suffering from tonsillitis. Having never suffered from it before it left me weary and exhausted for nearly week. I am a stroppy ill person and refusing to go to the doctors I got a severe warning that if your temperature is 103 and you’re hallucinating in bed you are actually ill and need to take time off work. Drugged up on antibiotics and lemsip this book was an absolute life saver during that time and I cannot thank the author enough. The novel is basically a book in diary form following the life of divorcee, mother of one Fleur. Being unlucky in love she (sensibly?) turns to her family and friends to set her up on dates which span from hilarious, to god damn awful. Until Henry enters the scene, could he be the one to end her dating crisis?

What I loved about this book is that although Fleur is your stereotypical chick-lit character by adding the fact she is in her thirties, divorced and with a child it helps to add factors that make the story a little more unconventional. She isn’t faultless and it adds an authentic feel to the book. This is further helped by the format of the diary which helps you connect more strongly with the main character. The secondary characters including Jack, Denise and Leanne are wonderfully described and the way that the friendships interlink with the story helped to create different storylines. I also liked the way that Henry isn’t a character that you immediately fall for however as the story continues you can’t help yourself. I must admit it felt like the author was reading my mind in terms of the story and characters she put forward, you could tell she was trying to think a little outside the romantic genre ‘box’ and bring the reader something different which I really thank her for! Additionally I liked that Tobey, Fleur’s son in the book played a standing role throughout. Sometimes authors include children just to give the book a little edge but then forget to make them completely involved; not here! Tobey is a star of the book and I loved his cheeky personality.

In terms of the storyline it is a little predictable, but strong character profiles help to counter this and keep the reader engaged. The ending is guessable by the end and I had worked it out but this is only a small criticism. It’s really difficult to make relationships feel genuine whilst not giving anything away so I think the balance was about right. The only negative comment was how short the chapters were and was probably why I finished this book so very quickly. Although sometimes having short chapters helps keep the action and the pace moving I thought that some of them could have been strung together to help play out the action rather than bring it to an abrupt stop. It also meant some events ended up being over two chapters which felt a little clumsy. Additionally at times the humour seems a little forced as though the author is desperate to get a laugh out of the reader but sometimes a more relaxed take would have worked a lot better. Finally in terms of her and Henry’s relationship I thought it happened a little too quickly. It moved incredibly fast and it would have been nice to have had a more drawn out feel (which could have been helped with longer chapters on the whole.)

Overall this is a romantic chick-lit with a difference. It really played on the idea of clichéd bad dates and funny moments but by adding realistic character profiles and interweaving storylines it helps to make the book more enjoyable. I did have a lot of giggles reading this book and it really reminded me why the chick-lit genre used to be one of my favourites. I also loved the Wicked Witch Trio in the playground so watch out for that little gem. A story that helped to bump romantic chick-lits up my genres to read so thank you! 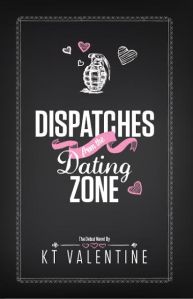 One thought on “Dispatches from the Dating Zone: K T Valentine”