So once again, going to start with review with an apology. To all the writers, and authors that have sent me bits to review, I am getting round to it! It’s been a tough couple of weeks and to get over it all I hid from the world (including mylittlebookblog) to give myself a chance to recover. Although it’s not all okay just yet, I am feeling a lot better and have been easing myself back into the blogging slowly! I was sent this book as part of a set by the lovely S.M. Stevens, and reviewed the first book a couple of weeks back! Once again it’s all got a bit theatrical here at mylittlebookblog as here I am reviewing the second in the trilogy. Thank you again to the author for sending the trilogy of books to me and sorry it’s taken a while to get round to it! Remember if you have a book you would like reviewing do not hesitate to send me a message through the contact page on my ‘Review Requests,’ page! Anyway, right, I won’t waste any more time, the stage is set, the actors are ready, the curtain is about rise, get ready for the show!!

Sadie Perkins just wants the Crudup High drama club’s spring musical to go smoothly, but the original production of “Wuthering Heights: A Modern Tragedy” is threatened when an anonymous texter starts bullying Sadie’s gay friend Foster, the lead in the play. And Sadie’s boyfriend Alex is suddenly acting homophobic, making Sadie wonder if she really knows him at all. On top of that, she has to add a controversial, secret song-and-dance number to the show behind the director’s back, to impress the professor from the Yale School of Drama. Find out how it all ends up in this sequel to “Bit Players, Has-Been Actors and Other Posers”. Stevens has done it again and has created the perfect book for teen lovers of musical theatre and show choir. Once again, a book of dance, drama, show business, friendship and musicals! Wow, such a lot packed into one extremely thoughtful book, strung together with well built up characters and a strong message to boot.

Once again the book has extremely strong characterisation; Sadie as the main character has grown in stature and comes across as a strong and more mature character. I really wanted to see her thrive in the first book, and through this book she has really grown into herself and has become more of character in her own right rather than an unlikely main character. Additionally Alex has grown from a side-character to a main character, and although the story revolves around his potential involvement in the bullying, I couldn’t help but be happy that he has matured and become his own person, and equalled the strength of Sadie as a character. Once again the supporting characters are just as well described, especially Foster, who the story revolves most around. By bringing forward a supporting character and revolving the story around them it makes the story feel like an episode in a popular teen show such as a Glee; this add s a modern feel to the story and adds a popular culture edge that will bring in and entertain young adult readers. This is further mirrored in the way that the songs for the play are modern songs adapted to the drama that was unfolding on the stage. Once again by imbedding modern songs in the book it adds a modern edge and I was equally impressed that the author could take such a classic book as ‘Wuthering Heights,’ and bring it so up to date. Once again it was nice to be able to sing along to the songs, and look them up to listen to the rhythms and get a real feel as to how the musical would have been like. Once again it makes the book a lot more interactive and allows you to really get involved with the story. Additionally I loved the addition of a storyline that looked at the difficulty of bullying. It is in an incredibly important issue in schools, and to tackle it in the book although a tiny bit clichéd really worked here and was dealt with, with maturity and understanding. It also allows for a really interesting ending that pulls all the strings together, whilst also taking the reader by surprise. By the end I had worked out who the bully was however it took me a little while and the way that the characters deal with said character is a little mean, but it helps to bring an end to the destruction.

Like the first book once again the book entwines a little mystery, with friendship, trust, confusion, love and overall drama. The characters have a real sense of truth to them and are well bodied making it easy to imagine them. I thought that this book was a little more glee-like which didn’t appeal to me as much, however I still greatly enjoyed the story and the mystery that the ‘bully-storyline’ created. The discrimination towards Foster is handled with dexterity and is very relevant in today’s world and in Steven’s tackling such a tough topic it only help to show how skilled she is as a writer! For me the book was a little short however for younger readers, it is the perfect length to keep the attention and to pull the reader along to the very last page! Brilliant, and definitely worth a read if you love theatre! 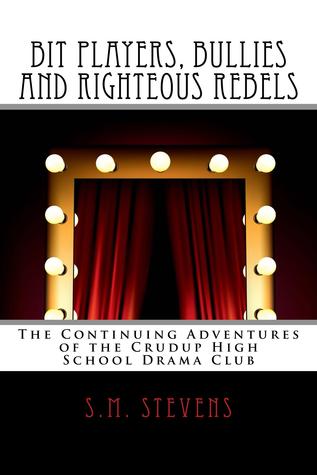