When I found out that ‘The Cuckoo’s Calling’ was written by Rowling I didn’t have the immediate feeling of getting hold of a copy and giving it a read. I may have been an avid HP fan but this book really didn’t take my fancy. Despite myself I downloaded a copy, to which it sat untouched, for months until I was having a terrible day at university and found myself reaching for my Kindle. As soon as I read the first page I was hooked; I devoured this book and thought it was a brilliant piece of writing! So settle down and get stuck into this review!

Comoran Strike is a soldier who after being sent to Afghanistan has come back from the war, and after being hurt in an accident and losing a limb he has had to start a new life and become a private investigator. Strike is a brute of a man however he is a modern-adaptation of the hard-mannered detective. He drinks like a fish, smokes like a chimney and after the ending of his on/off relationship with Charlotte causing him to find himself homeless, Cormoran Strike is a mess. However, he is not lost, actually he is far from it. Strike is a hard working character, with analytic skills, an understanding of how to get to people and how to get the real, hard facts. However, work is slow and difficult, until a certain case comes along. A very famous model, Lula, has appeared to commit suicide; but her brother John seems otherwise. He employs Strike to take on the case and investigate the suicide. However there is another character to introduce at this point; Robin finds herself suddenly immersed in Strike’s office after take a temp position in his office. However their relationship starts with a rather rude first meeting. Strike’s soon to be ex-girlfriend is storming out of the office, and Strike, after running after her rather rudely knocks Robin over, who is unfortunately in his path. To stop her falling he grabs her breast causing an immediate reaction between the two characters. Robin however gets the job as the secretary and she is ultimately the one who opens the novel to the reader and she definitely deserves a mention. She is a lovely English woman who, recently married is naïve and innocent but desperate to get a little action back into her life; and she sees this job as her chance. She throws herself into the work and becomes Strikes personal assistant becoming more and more involved in the case.

The book continues by weaving back and forth between the continuing case and works to mix in a number of different and diverse characters that all have a say about the recently deceased Lula. Quite interestingly it is a book about looking and re-looking. This is not a slap-dash mystery; it is a well planned and executed plot-line. Strike at one-point states ‘the dead could only speak through the mouths of those left behind and through the signs they left.’ and this is exactly how they solve the case. Cormoran and Robin immerse themselves in the life that Lula lead, acquainting themselves with rappers, models, hair-stylists, fashion designers and rock stars. Comoran who is the son of a rather famous musician has always kept a distance from the world of the rich and famous and now finds himself moving through a world where he really doesn’t fit in. Rowling doesn’t miss a beat when describing the social differences that begin to show between Strike and the characters that start to appear when discovering Lula’s rather hectic life and Rowling really explores this; especially in the discussion of Lula’s rather raucous and arrogantly selfish boyfriend, who turns about to be a more complex character than we first thought! The story at this point stars to evolve, and Strike who originally had no feelings towards Lula starts to develop an emotional attachment to case due to learning about her through her friends and her family. He also begins to build relationship with Robin and their relationship becomes strong as they start to solve the case together. The story continues with tension building to finale, however, there are no spoilers here so get a copy and start reading!

When I was reading this book I kept trying to imagine that I had no-idea that Rowling had written the book and instead that is was the pseudonym. It was pretty difficult but I think that if I had been given the chance to read  the book without knowing I wouldn’t have picked it out. However after reading and picking at the writing of the book I can see the style hints of Rowling. One of the most obvious ways of telling is through Rowling’s fluid writing. There are never any dips in her writing and it keeps the pressure on. Secondly the detail that she manages to get into her writing is brilliant; no stone is left unturned and no detail is not included; however it is done in Rowling’s brilliantly non-descriptive but still intensely written prose. I loved the way the story flowed through and managed to mix mystery with an understanding of friendship and companionship. The characters were really well written and I found that they were all well described. The plot was succinctly written and delved and weaved between characters and clues; also the twist at the end was a strong ending. I must admit I did wonder about the the finale and I did entertain how the book actually ends; however I dismissed it and then it turned out that’s what it was! I must remember to trust my detective skills!

Would I recommend this book? Definitely! I have seen many reviews that slate the way in which Rowling revealed that she had written the book after it plummeted in popularity and many say that it is only mediocre at best. However, I think that it is a clever little book with a lot of potential and I think you can only judge a book once you’ve read it and this one deserves a read. 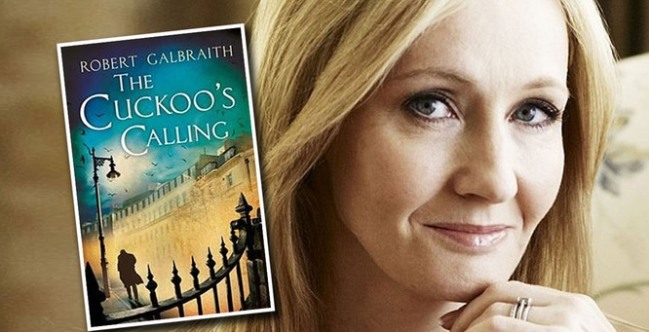 10 thoughts on “The Cuckoo’s Calling: Robert Galbraith (aka JK Rowling)”