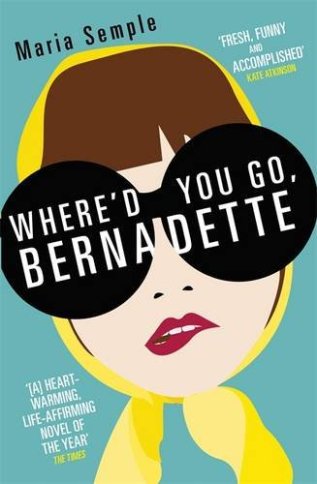 I had this book bought for me for Christmas by my darling mother. What a star eh? I requested this book because I had seen so many reviews of the book and thought I had to get involved and find out what the book contained and whether it was worth such a big fuss. I must admit, I was shocked, I am a huge fan of this book and I now understand why there have been so very many good reviews of this book! It is a beauty! So, without further a do here is my review! ENJOY.

The best way to describe the form of this book is using the word, collage. Yes, an odd word to describe a book but it definitely works here. Semple’s novel is a witty collation of emails, faxes, written letters, live blogs, text messages, FBI reports, doctor’s notes and magazine articles. They are all pasted together to create a narrative that describes the life of the young and lovely Bee Branch. Bee is a smart and eloquent but lively and excitable character with great promise. However, behind her delightful exterior Bee is worried about someone; and that someone is Bernadette, her mother. The thing is Bernadette likes to retreat from the world, by rarely leaving the house choosing to order everything in, so that she can keep completely to herself and her family. However, life is getting increasingly tough for Bernadette and after Bee does especially well in her end of class test, a forgotten promise appears. Bernadette has promised that they will go wherever Bee wants to go; and that place is Antarctica. You can see the problem. Bernadette will have to leave the house and show herself to the world.

But what has caused Bernadette Fox to be this way? Bernadette is a renowned architect, obsessed with green architecture, who once earned the MacArthur genius Grant. However, after an extremely stressful green build as part of a competition, the site that Bernadette spent so many months constructing is bought and demolished. Soon after Bernadette gives birth to her daughter and then she just stops. Her husband Elgie moves the family and takes a job in Seattle, which further constrains Bernadette. She therefore spends her days in a trailer at the bottom of the garden, communicating with an online assistant to minimise her need to talk to the outside world. This assistant manages everything from finances, to shopping to legal debate. However it means that Berndette can hide even further from the world. Will this trip to Antartica allow to Bernadette to finally disappear into the white. Or will her husband and the people around find the real Bernadette in time to save her.

There are many positives to this book; it is very funny and at times unrealistically hilarious. However the character types of both Bernadette and Elgie, in collection with Bee, are so perfectly portrayed that you can imagine the events happening regularly. At one point in the book one of the ‘gnats’ (the term Bernadette uses for the mothers of the children that go to the private school Bee attends) asks her rather rudely to remove the blackberries from her back garden. When Bernadette refuses the mother goes into the garden to remove them herself. Bernadette catches her and puts up a horrifically large sign in the back garden warning trespasses against entering the garden. However, the sign crashes to the ground taking out most of the garden of next door, whether rather accidentally, there is picnic lunch for the new intake for the local school. The chaos that occurs is hilarious and rather brilliant. However it is not only hilarity, which makes this book brilliant. Semple manages to get in a number of digs at not only the self-help culture, but also Seattle and noticeably the American private school system. This is brilliant as it allows Semple to explore a deeper meaning for Bernadette. This is further seen in Semple’s exploration of how to be a parent. Throughout the book Bernadette and Elgie argue about the way in which to bring Bee up and whether they should be constraining her intelligence and creative impulse or whether they should let her fly free. However, it is also interesting in Bee’s understanding of her mother. Often Bee does not understand her mother’s difficult character and does not understand her difficulty with the real world. The style of the book works additionally to its advantage. The tone is kooky and alternative throughout, and although this can at times become aggravating Semple does manage to maintain it adding to the style of the book as a whole. The character profiles are brilliant and well thought through and they are easy to picture in the mind as they are built up so very very well! I loved this book it had honesty, wit and clarity and was a brilliant book that definitely deserves a read!