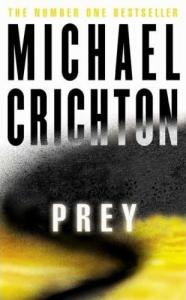 I was recently sorting out a pile of my old books and stumbled across ‘Prey.’ I have piles and piles of books hidden around my room, in the wardrobe and under the bed and I often forget about them! So here’s a blast from the past and a review of ‘Prey’ by Michael Crichton

This is a gripping science fiction novel that would get any science fiction fan excited. In the Nevada desert, a science experiment has gone terribly wrong. A cloud of nano-particles—micro-robots—has escaped from the laboratory. This cloud is self-sustaining and self-reproducing. It is intelligent and learns from experience. For all practical purposes, it is alive and it has been programmed as a predator. It is evolving swiftly, becoming more deadly with each passing hour and every attempt to destroy it has failed. There is one problem: we are the prey. Jack Forman is the main protagonist of the story, an up tight, tense, former programmer that is trying to get used to life as a house-husband; looking after his children, doing the housework and tip-toeing around his increasingly stressed and distant wife. However it is not long until Jack is called to the lab in the desert where Julia works to try to program and control the demonic swarm of tiny robots.

The opening pages are exciting and tense. Julia, Jack’s wife is becoming distant and less human by the second. Not only is Julia becoming more tense, and stressed but her behaviour is becoming erratic. The atmosphere that Crichton creates is mysterious and tense, and as a reader we are drawn into the narrative. However as soon as Jack enters to desert the novel starts to gallop with inordinate pace, and although this is exciting, personally, as a I reader preferred the pressured atmosphere of the first chapters.The fight between humans and technology is the main plot line of the story. The workers at the plant, a bunch of contrasting characters, each with different personalities and behaviours must fight against the deadly swarm in the isolated conditions. This is against the clock as the swarm is evolving and getting stronger at every page turn; evolving into the optimum killing machine.

This book is a clever and exciting with a great pace. At times the science fiction jargon of the novel was complicated and complex and created an intricate and knotty plot line that was at times difficult to follow. I think at times Crichton over complicated the use of language and for me as a reader made the plot difficult to follow at points. I liked the contrasting characters in the group fighting the deadly swarm however a seemingly incompatible relationship that sprang up from no-where did seem a little inconceivable and therefore a little fake. However the story is strong and the plot is deep in meaning and understanding that means we as a reader are transported to the desert. The writing is technical and advanced and although this can sometimes be a little difficult, it shows the depth that Crichton has gone too to give a fictional authenticity of the story. This also means that although as a real concept it is inconceivable, we can’t help but wonder if it could potentially happen!  Although the language is sometimes difficult and full of names, number and formulas, as a reader I really enjoyed the plot and found myself carried away by the action and drama. If you are a science fiction or action fan this is definitely a book you need to get on your wish list, however I would still recommend this to any reader as the plot and characters are intense and brilliantly executed.