I don’t know how she does it?

One thing to start; I know this is also a film and it got terrible reviews but I know that readers are the most open minded of people! So trust me and give it a read! I’m a book nut, a bookworm, a book- anything and I always try to read ‘the’ book before I see the film. I am happy to say when watching the film I was so glad I had read it before, as like many others the book is pretty faultless and the film is well… less so…. okay a lot less so!  So if you’ve seen the film and didn’t like it read the book!

This book is brilliantly funny, silly, flirty, and comedic. Kate Reddy is a full-time working mother who’s life is paved with guilt that she is not spending enough time with her children whilst her ever suffering husband tries to fit in with her busy schedule. Flying to different countries at the drop of a hat this story follows the difficult job of balancing work, love, and family. We see her buying mince pies and ‘distressing them’ at 3 in the morning as if to make them look homemade, trying to keep up with stay at home mums whilst also finding it difficult to stay away from the advances from a work associate Jack Abelhammer.

Unlike the film that has a number of awkward moments, and lacks comedy the book has a frantically believably desperate but comedic tone, seen for example in the number of lists written at the end of chapter, ‘Thank you letters  ‘think about half term plan. What already? Yes, already. Swimming party on Saturday for ‘Jedda’ girl or boy find out?’ Pearson writes with a comedic style that is always against the clock a pressured bag/keys/money/mobile on the go style that keeps the narrative moving as we continue to see Kate hide the pressure from her friends, husband. boss and children. Kate Kellaway at the Guardian states ‘at no point is this a dreary whinge from the kitchen… it is a comic broadcast from the office.’ And I would have to agree it is a fight for the modern day female, giving us a personal view into the life of a busy working mother.

Pearson is open and honest stating many home truths, which helps to show us the desperateness of the main character. ‘Is it coincidence that we spend far more than our parents ever did on the restyling and improvement of our homes – homes in which we spend less and less time… It is as though home had become some kind of stage-set for a play in which we one day hope to star.’  There are a few problems I found with the book, some of the characters were not explored to their full potential such as Kate’s parents, and to a point her husband which I felt let the narrative down a little as Kate took centre stage at almost every sentence. I also felt that Kate’s relationship with her children could have been better approached. The encounters were mostly at night with Kate awakening her children in which to spend time with them leaving a slightly underwritten account of her children.

I would definitely recommend reading this book, it’s an honest and comedic read that gives a sense of honesty to the modern day woman. 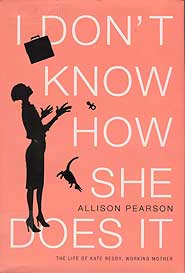